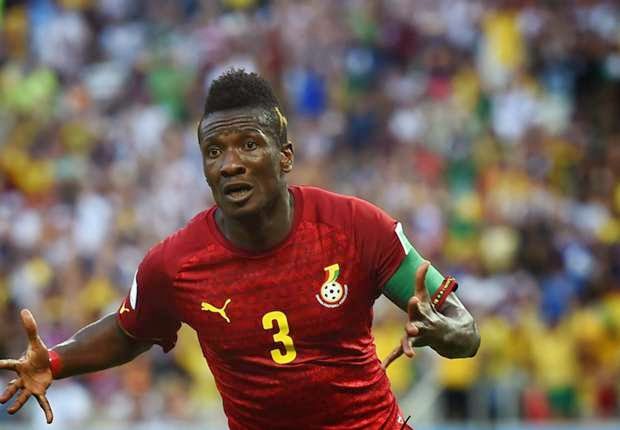 Is, has always been, and would always be.
He hasn’t had the most stellar of careers at the highest level of club football, unlike Samuel Eto’o Fils and Didier Drogba.

He hasn’t even won any major titles with his country’s national team, unlike Mohamed Aboutrika and – again – Eto’o.
Still worse, he has long been regarded by many of his own countrymen as just not being good enough.
Nevertheless, the ‘Baby Jet’ is set to go down as one of the most respected goalscorers in the annals of the African game.
When he does retire, Gyan would be mentioned in the same breath as a bonafide great like Cameroonian legend Roger Milla.
How?
Well, mainly on the back

of his World Cup exploits.

Forget Ghana’s miserable adventures at the 2014 Fifa World Cup; Gyan’s individual displays in Brazil have helped cement his place in African football’s pantheon, as he has now bagged some of the continent’s most coveted records in Mundial history.
He ticks almost all the boxes, really. Most appearances by an African at the World Cup (11 matches, joint with François Omam-Biyik): CHECK. Most goals scored/assisted by an African at the World Cup (9): CHECK.
And, topping it all, that which arguably matters most:
…the record for the highest number goals scored by an African at the World Cup, with Gyan’s sixth -scored against Portugal in the 2-1 loss in Brasilia yesterday – overtaking Milla’s long-standing record of five.
Four of those goals have proved the difference between a win and something less, underlining Gyan’s incredible big-game mentality on football’s grandest stage. 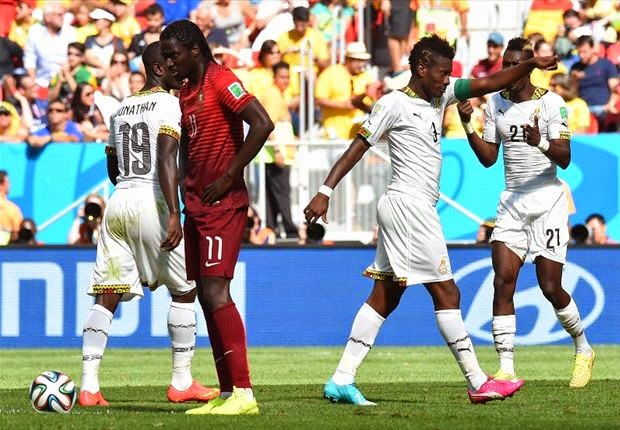 On the evidence of his performances at the 2010 World Cup in South Africa – where he scored thrice and came just a converted spotkick short of landing Ghana a historic place in the last-four – Gyan was named on that year’s Fifa Ballon d’Or final shortlist of 23 and, after the voting process, had beaten the likes of Philipp Lahm, Miroslav Klose, Cesc Fabregas and Dani Alves, to place 18th. 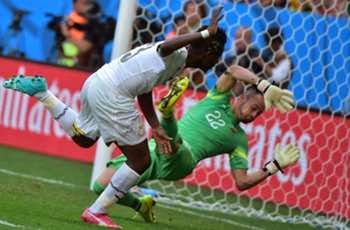 When he does retire, Gyan would be mentioned in the same breath as a bonafide great like Cameroonian legend Roger Milla… Forget Ghana’s miserable adventures at the 2014 Fifa World Cup; Gyan’s individual displays in Brazil have helped cement his place in African football’s pantheon
Aged just 28, Gyan has some more years to spend on refining and adding a little more gloss to what is already shaping up to be the shortest possible shortcut to greatness. Really, what could be simpler than popping up at every other World Cup, scoring a handful of goals, dancing your way to earning the planet’s affections, and making history while at it?
Ghana’s participation in Brazil over, Gyan would now concentrate on getting more goals to increase the gap between himself and anyone who could ever threaten his perch atop the Black Stars’ all-time scoring charts.
Come Russia 2018, he might be back doing what he does best.
Whether he does or not, though, Gyan is already great in ways more renowned African poachers like Eto’o, Drogba, and George Weah won’t ever be.
He is a World Cup legend. And that’s a fact.