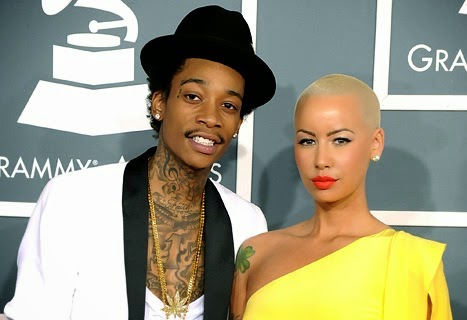 Rapper Wiz Khalifa, 26, and Amber Rose, 30, are the latest hip hop couple to be rocked with break up rumors. According to MTO, Wiz, like Tyga, wants out! He’s even been hinting with some tweets..
From MediaTakeOut
Get ready for the break up of the year y’all . . . a very reliable insider tells us that rapper Wiz Khalifah is ready to end his longtime relationship/”marriage” with his babys moms Amber Rose. And it’s gonna be messy!! Continue…
The insider told MediaTakeOut.com that during his tour, Wiz has gotten accustomed to sleeping with GROUPIES – and he’s ready to be single again. The snitch told MediaTakeOut.com, “Don’t get me wrong, Wiz loves her and she’s a cool [girl]. But he needs to be single right now.”
So why is it MESSY??? Well the insider told us that Amber has been PRETTY OPEN WITH WIZ during their many arguments – that if he leaves, she’s getting the most VICIOUS LAWYER IN THE WORLD – and is gonna hit him for the MAXIMUM CHILD SUPPORT that she can get.