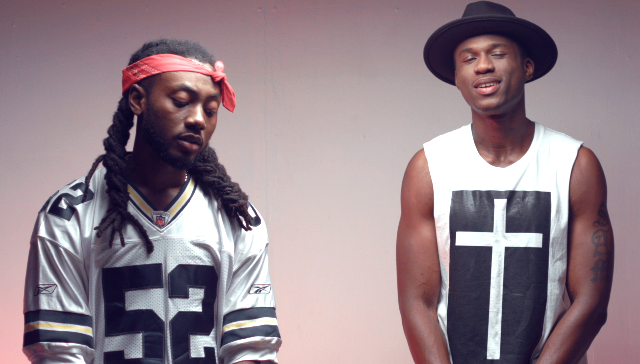 Ghanaian rapper, Joey B will be the star performer at the Big Brother Hotshots live eviction show this Sunday. He is expected to fly out to Johannesburg on Saturday evening with his ‘sidekick’ and one of the biggest discoveries of the year, Pappykojo.

Together the two have already produced two hot bangers, ‘Wave’ and ‘Realer No’, which have become anthems for the youths of Ghana. Which song will they perform together on Sunday and will they manage to wow BBA fans across the continent?

Joey B (Darryl Paa Kwesi Bannerman-Martin) burst onto the scene a few years ago with songs like Tonga and Strawberry Ginger.  He makes music in five languages (English, Ga, Twi, Fante and Pidgin) and the genre ranges from Afrobeats, Hiphop, RnB, House, Dancehall, Hiplife and Highlife.

After leaving the Skillions Records nest, Joey B worked with ace Ghanaian producer ‘Hammer of the Last 2’ for a while, recording material and featuring on the record label’s first signee Edem’s hit single ‘Kate’. D Black signed Joey B to Black Avenue Muzik record label in 2012 after he played a vital role in making the popular song ‘Vera’ by D Black a hit.

During that period, Joey B supported D-Black on stages in Ghana, Nigeria and Europe and also released his own hit songs like ‘Strawberry Ginger’ and ‘Chop Kenkey’ which gained massive airplay in Ghana and the UK especially. Joey B’s first music video ‘Strawberry Ginger Remix ft. D-Black and E.L’ was also released under Black Avenue Muzik record label in 2013 and he headlined shows in Ghana and the UK including the Afrobeats Concert in May 2013 at the London o2.

His performance caught the eye of the BBC who featured it on their Afrobeats Documentary in August 2013.

At a young age he has been nominated for several awards:  Best Discovery Video and Best Hiplife Video for ‘Strawberry Ginger’, his first hit single at the 2013 4syte Music Video Awards in Ghana and six nominations for the prestigious Vodafone Ghana Music Awards 2014 (VGMA) for: Best New Artiste of the Year,

Do not miss the Brother Africa evictions this weekend  on AfricaMagic, AfricaMagic Entertainment, AfricaMagic World as well as on DStv channel 197 and 198.

Africa’s biggest reality series will be screened live 24/7 on DStv channels 197 and 198 while GOtv audiences will be able to see highlights on AfricaMagic World. Big Brother Africa is produced by Endemol SA for M-Net’s AfricaMagic. For more information you can log onto www.bigbrotherafrica.com where you can also see interview videos of the Hotshots housemates.