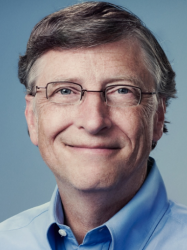 The Bill and Melinda Gates Foundation has announced it will be donating $50million (N8billion) to support the efforts of Nigeria and other West African countries hit by the Ebola Virus outbreak in containing the spread of the deadly virus.

Announcing this in a statement issued today September 10th, the foundation said the money will be immediately released to the United Nations agencies and international organizations that are involved in the Ebola fight to enable them and national governments purchase needed supplies and scale up emergency operations. Continue…Th foundation also announced the immediate release of an additional $2million to the various Centres for Disease Control and Prevention to support incident management, treatment, and health care system strengthening during this epidemic.

The foundation also pledged to work with private and public organizations to facilitate the speedy development of therapies, vaccines, and diagnostics that could be effective in treating patients and preventing further transmission of the disease.