consumables, and free haircut partly paid for and donated by some well wishers.

Sunday’s exercise was in accordance with a yearly ritual of giving to the facility, which has

three other branches nationwide. The successful broadcaster has for years been giving to

the facility, and has encouraged others to do so. Every year, he visits the facility with some

friends and associates who share in the spirit of reaching out to the less privileged.

A fun day that saw a delivery of great entertainment package, it was a perfect way to kick

start his birthday celebrations  which fall on March 1.

This year’s exercise also saw the adoption of one of the key resident blocks of the school;

Bola Ray and his friends will be responsible for its upkeep and growth henceforth.

The adoption comes on the back of a donation of a vehicle to the facility last year.

Receiving the items on behalf of the Village, Alexander Kekula, National Director of the

2011, adding he’s become an important asset to the Village and the children.

An excited Bola Ray, thanked officials of the facility for building on the relationship, which

started a little over six years ago.

Promising to be a good ambassador, he announced a ready employment offer for one of

SOS is the world’s largest charity for orphaned and abandoned children. It caters for over

60,000 children in 125 countries around the world. The project gives children who have

nothing and no-one a new family, a home, an education and a future.

It is also a large school charity; there are 404 education programmes across the world,

helping 130,500 children to be equipped with knowledge and skills. It has teaching

resources for schools, including the Our Africa project where children from across the

African continent present their own countries 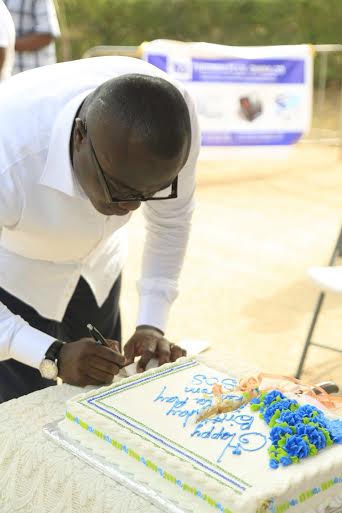