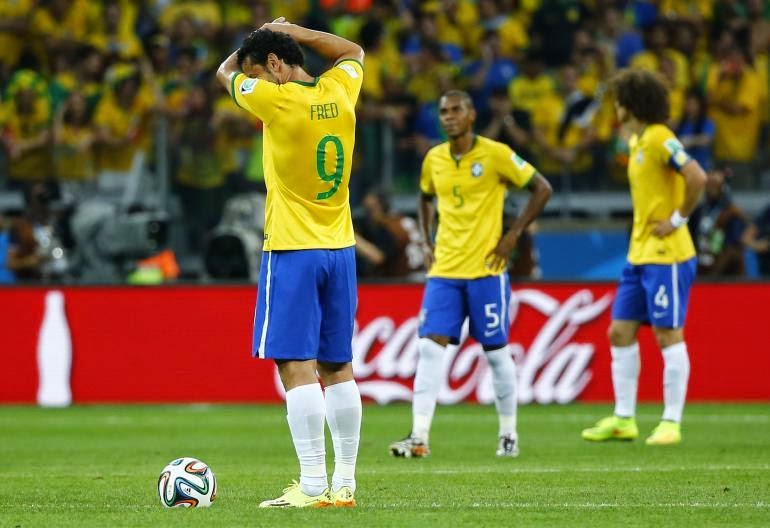 Goals from Robin van Persie, Daley Blind and Georginio Wijnaldum were enough to give Oranje the win over the tournament hosts
Brazil suffered further World Cup humiliation as Louis van Gaal signed off as Netherlands head coach with a 3-0 victory in Brasilia.

The tournament hosts entered Saturday’s game hoping to restore some pride following a 7-1 semi-final drubbing against Germany. However, they were undermined as first-half goals from Robin van Persie and Daley Blind and a Georginio Wijnaldum injury-time effort ensured Van Gaal’s men took the dubious honour of finishing third.

Not even the presence of talisman Neymar on the bench, albeit not among the substitutes due to the broken vertebra suffered in the quarter-final against Colombia, could rally Brazil.
By contrast, Netherlands were excellent as they sent Van Gaal off to his new role as Manchester United manager on a high.
While the semi-final shootout loss to Argentina will sting, the new Old Trafford supremo will surely look back fondly on a campaign that was not expected to progress beyond a group featuring Spain and Chile.
However, there are few positives for Brazil, whose defeat further consigned their efforts to a dark chamber in their nation’s rich footballing history and leaves coach Luiz Felipe Scolari facing an anxious wait over his future.
Such a result seemed unlikely when Wesley Sneijder picked up a hamstring injury in the warm-up, Jonathan de Guzman deputising.
Yet there were no such issues when the game began, with Van Persie putting Netherlands ahead from the penalty spot inside three minutes with his fourth goal of the World Cup.
The striker was instrumental in the move that brought the spot-kick, his clever ball freeing Arjen Robben, who was pulled back by Thiago Silva.
Back in the side following suspension, the skipper was fortunate to only be shown a yellow card, although Brazil felt aggrieved given the contact appeared to be outside of the box.
Undeterred by the subsequent protests, Van Persie despatched a perfect penalty in the top corner that may have left many fans wondering what might have been had he still been on the pitch versus Argentina.
Things quickly went from bad to worse for Brazil as David Luiz’s dreadful headed clearance from De Guzman’s cross gifted Blind the simplest of finishes after 16 minutes.
The hosts did at least threaten an equaliser, Paulinho and Luiz somehow failing to get on the end of Oscar’s wicked delivery across the six-yard box.
To their credit, Brazil continued to battle after the interval with Ramires hitting narrowly wide after getting the better of Ron Vlaar.
Brazil’s hopes of getting back into the game were undermined by further poor refereeing, too, as Oscar was booked for diving in the area having been brought down by Blind.
That the left-back was subsequently carried off on a stretch due to the contact only added to the farce.
Even if the penalty had been given, a Brazil comeback seemed unlikely, with a campaign that initially carried such hope ending with a whimper when Wijnaldum powered home Daryl Janmaat’s cross in the 91st minute.
source: goal.com