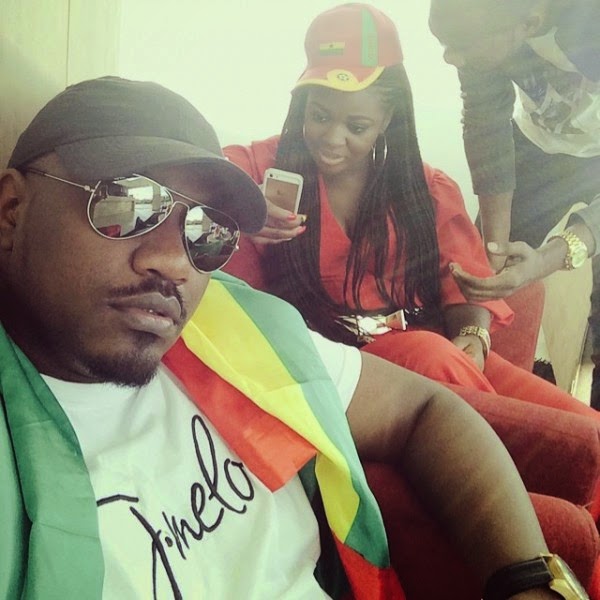 One of Ghana’s special Ambassadors to the World Cup in Brazil, John Dumelo has said he made meaningful use of the privilege accorded to him to represent the country at the ongoing 2014 World Cup tournament in Brazil. “I have killed two birds with one stone”, he said on Peace FM’s morning show ‘Kokrokoo’ when he was answering questions in connection to allegations leveled against him for promoting his own brand of cloths instead of promoting Ghana’s image which was the main reason he was in

“My decision to wear my own brand of cloths was to enable me explore the numerous business opportunities available in Brazil”, he added. He stated that the effort of government to attract more investors into the country has been boosted and more Brazilians have expressed interest in coming to Ghana. John Dumelo is an actor and owns his own clothing line.
He was among a number of musicians, actors and veteran footballers chosen by the Ministry of Youth and Sports to represent Ghana as official Ambassadors for the 2014 World Cup in Brazil. The rest are Becca, Jackie Appiah, Grace Ashy, C K Akonnor, Tony Baffoe, Abedi ‘Pele’ Ayew, Kwame Ayew, Augustine Ahinful, Samuel Osei Kuffour, Tony Yeboah, Ali Jarrah and Azumah Nelson.
The Ministry of Youth and Sports reportedly gave each Ambassador about 20,000 dollars but John refuted this claim, adding that the media misunderstood the situation.
“We were not paid 20,000 dollars, it was a volunteer work”.
He agreed that they had some challenges on the day of the Germany – Ghana match when they had to sleep at the airport overnight due to the unavailability of flight to Fortaleza. Otherwise hewas generally satisfied with the trip.
The special Ambassadors, he said, were able to raise 2 million dollars from corporate bodies to enable Supporters Union of Ghana to travel to Brazil in order to support the Black Stars.
By Faustine Akwa