The management of Despite Group of Companies has on Tuesday, February 9, 2016 released a press statement apologizing to Okay FM listeners, the Member of Parliament for Assin Central Kennedy Agyapong and the general public.

“The management of Despite Group of Companies sincerely apologizes to our cherished listeners, friends and all concerned for the unfortunate incident which ensued between our presenter, Valentina Afia Agyeiwaa aka Afia Schwarzenegger and the Honourable Member of Parliament for Assin Central, Kennedy Ohene Agyapong,” the statement read.

The Management expressed its regret for the “unfortunate recordings circulating on social media even though most of the audios were not recorded in our studios.”

The statement said that: “The structure of the Despite Group of Companies is NOT to malign, denigrate, insult or condone and support acts of insults against personalities in society. Our business was built mainly to address social issues, to bridge the information gap, and to serve as a platform for the exchange of ideas and generate discussion that will be of mutual benefit to our various publics and us.”

It [statement] stressed on the fact that its first radio station, Peace 104.3 FM, established 17 years ago, had made giant strides in the attainment of this goal.

“We hereby extend our unequivocal apology to the general public, Oman FM, Honourable Kennedy Ohene Agyapong, and all other persons who may have been scandalized or have suffered in any way as a result of this incident.

“Management is handling the issues surrounding the conduct of our presenter internally and also in the best interest of our business,” the statement added.

see the statement Below… 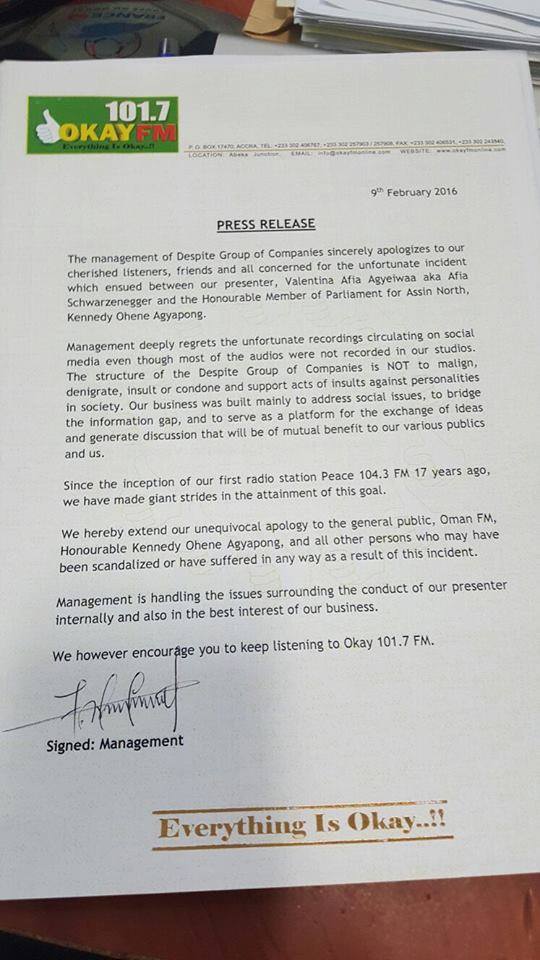