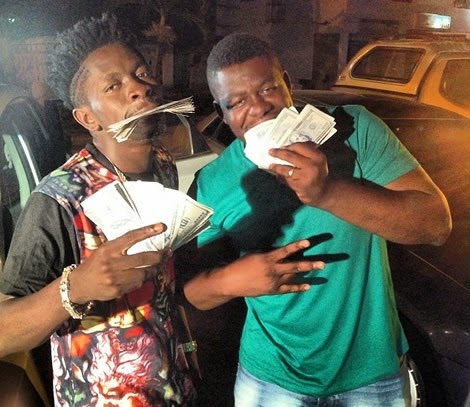 Since news broke last Thursday that the Police had arrested Nana Asiamah Hanson aka Bulldog, 36, in connection with the murder of Fennec Okyere, local showbiz circles have been abuzz with one question.
“Did Bulldog, who is the manager of prominent dancehall musician, Shatta Wale, kill Fennec Okyere, manager of popular rap musician Kwaw Kesse?”
Fennec Okyere was found dead in his house on Spintex Road in Accra on March 13 , 2014. His body was found in a pool of blood.
According to the Police, Bulldog was arrested last week after a two-month surveillance for the perpetrators of the alleged murder and has been in police custody “to assist with investigations”.
Speaking to the Daily Graphic last Thursday, the Director General of the CID, Commissioner of Police (COP ) Mr. Prosper Agblor, told the Daily Graphic that Bulldog is alleged to have threatened Fennec on several occasions through voice and text messages on phone.
He said investigations by the police established that Bulldog had several confrontations with Fennec and threatened to teach Fennec a lesson.
First Confrontation
Citing some of the instances, Mr. Agblor said on November 26, 2012, Bulldog had a confrontation with Fennec during a programme at the Accra International Conference Centre dubbed “Night with the Stars”.
At the programme, organised by Joy FM, Kwaw Kesse stepped on a banner with the inscription: VIP, when he mounted the stage to perform. It was reported that Bulldog, who managed VIP, a music trio, was not happy and confronted Fennec over the issue.
Fennec, on the other hand, tried to explain but, according to reports, that explanation did not go down well with the suspect, who organised some men to chase Fennec and his group away from the programme.
Another Confrontation
Later, Mr. Ablorh said, investigations showed that during an entertainment discussion programme on Peace FM, during which both Fennec and Bulldog were interviewed, the suspect was offended by the answers provided by Fennec to questions from the host.
“After the programme, Bulldog called Fennec and threatened to send his boys after him to teach him a lesson and to get rid of him,” Mr. Agblor said.
The CID?Director General said Fennec retorted that, “the boys cannot do anything to him and that he could talk to them to calm down because he too has a group of boys he works with”.
Subsequently, the CID boss said, there were a series of threatening voice calls and text messages from unknown persons believed to be agents of the suspect. The police investigations also established that on March 12, 2014, Fennec received a call from an unknown caller.
Unfortunately, Fennec was found dead at his residence at Manet Gardens on the Spintex Road the next morning.
“Surprisingly, the suspect went into hiding after the murder of Fennec. The police monitored his house and other places, including entertainment shows, but he failed to show up,” Mr. Agblor said. 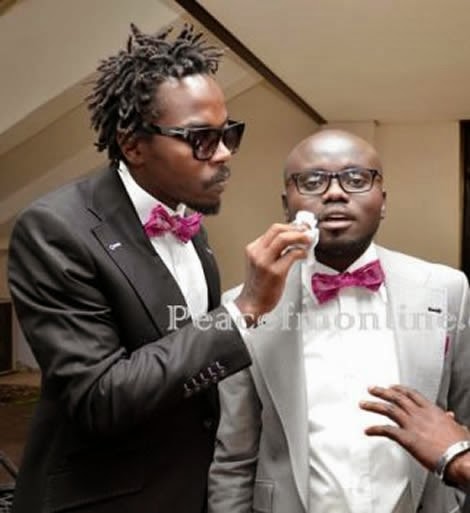 Expressions of UnbeliefBut some pundits and observers of the showbiz scene in Ghana have expressed their doubts over allegations that Bulldog might have killed Fenec. Notable among them is George Quaye, who is the head of Media, Brands and Communication for Charterhouse.Speaking on Peace Fm’s Entertainment Review on Saturday, George who used to be a working colleague of Bulldog said that even though Bulldog was an outgoing person and sometimes of a rather tough disposition, he did not believe that he could commit such a crime.“I go way back with Bulldog and I admit that sometimes he can be rowdy, but the Bulldog I know is just ‘patapaa’ but will never raise his hand or fight.”“I am not the Police and can’t do their kind of work because I don’t have their kind of expertise. I am talking about the Bulldog that I know and I believe that he is innocent.”Mr. Socrate Safo of Movie Africa expressed similar sentiments of unbelief. He said that Bulldog and Fennec were not enemies.“Many people do not know this, but I knew Fennec and Bulldog were working tireless to form an association for artistes’ managers but yet when they come on air, they behave differently. I have confidence that the Police Service will unravel the mystery behind Fennec’s death. That is what we all wish for now,” he stated.One person, who was instrumental in the late Fennec’s life, Mrs. Ursula Owusu Ekuful, has added her voice to the issue. According to the Member of Parliament for Ablekuma West, the arrest of Bulldog could bring an end to Fennec’s death case. To her, the family was very happy that a suspect, who may have committed the murder, had been arrested.But for Lawyer Kwame Akuffo, the arrest of Bulldog may not mean much. Citifmonline.com quotes him as saying: “I don’t think the gentleman should be a suspect at this stage. I think the gentleman is only a person of interest at this stage”.Being a Lawyer with many years of experience, Lawyer Akuffo believes that threatening text messages and phone calls alone cannot be the basis on which someone could be termed a suspect.Before the Criminal Investigation Department of the Ghana Police Service can hold Bulldog as the prime suspect, Lawyer Akuffo suggested that the Police should be able to link him to the crime scene by way of forensic test or conspiracy.