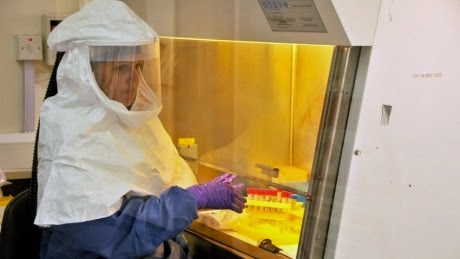 The Canadian Public Health Agency has offered to release 1000 dose of a made-in-Canada experimental Ebola virus vaccine known as VSV-EBOV which has never been tested on humans but has shown to be effective in the treatment of the disease in animals.
In a statement released yesterday August 12th, the Canadian Health Minister Rona Ambrose said the World Health Organization’s Director general, Margaret Chan, has approved of the donation.
The Minister also revealed that Canada will be donating $185,000 to the World Health Organization for the prevention and control of the deadly virus in Africa. Canada has only 1500 of the experimental vaccine and would be sending 1000 of it to Africa. Continue…
“I was pleased to offer the experimental vaccine developed by Canadian researchers as a global resource to help fight this outbreak,” she said, adding that between 800 and 1,000 doses would be donated to the WHO.
The Minister in the statement added that “Canada feels this experimental vaccine is a global resource, so in response we are sharing it with the international community, while keeping a small supply in Canada.”
The news comes hours after the World Health Organization said a panel of experts advised that it would be ethical to use untested drugs and vaccines in this raging epidemic, which is several times larger than any previous outbreak.