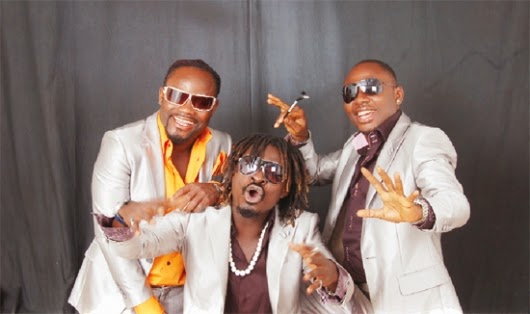 After a long period of speculation, hopes and doubts, Praye, the very hot trio that rocked the hiplife scene for about five years with hit songs such as Angelina, Shordy, Wo Din, New Dance and Concentrate is no more.
It was Praye Tenten who left the group first. This was about two years ago and after, there were speculation and expectations that he would come back to the fold and enable Praye to catch up on their dwindling fortunes.
The comeback did not happen and now, the two who have been holding the fort, Praye Honeho and Praye Tietia, have also parted ways.
The demise of the once hitmaker trio was confirmed by Praye Honeho when he spoke with Showbiz last Thursday.
“For now, there is no Praye group. The Praye brand is dead because Praye Tietia and I are pursuing our solo projects. We are no more together as a group”, he said.
Explaining the reason for their split, Praye Honeho also known as Choirmaster said that their decision to split was not borne out of misunderstanding but a consensus that they both agreed to take when Praye Tenten left the group.
However, the controversy that surrounded the departure of Praye Tenten, he conceded, affected the fortunes and success of their New Genesis album.
“When our brother left, we had recorded our last album, New Genesis. It wasn’t something that we expected so both Praye Tietia and I agreed to hold up the banner of the group for three years after which we could go our separate ways.
“During that period, our aim of being together as a group was just to maintain the Praye brand and promote the New Genesis project and album. It was something we had worked on for several years so it wouldn’t have been right to abandon it after Praye Tenten left. That was the more reason why we stayed together till now.
“I don’t have any issue with Praye Tietia, he can confirm what I am saying to you. Besides, he is also in the studio working on his songs” he said.
Praye Honeho himself, who now wishes to be called Choirmaster, is scheduled to release his first single titled, Ghana’s Most Beautiful, tomorrow, May 23rd.
He told Showbiz that he was confident that going solo would bring out the best in him since his fans will get to know the better side of his music potential. He said it was for such a purpose that he named his solo album, Revelation.
“I call this project Revelations because the people making my crew are bringing on board something new to the music terrain. It will reveal new artistes who have great talents, engineers and sound producers ready to bring new waves to the industry” he said.
The music industry is no doubt filled with great talents making the competition keener each day but Praye Honeho who have had glorious days with his former group members said he is not discouraged by the emergence of new artistes in the industry.
That he said was because, he had had enough experience as an artiste to sail through the difficult tides in the industry.
“Every artiste must be in line with what he can do best. It is not about what an artiste does to hit it big but what you are comfortable with. I have my own style and flair and I am confident it will work out for me” he stated.