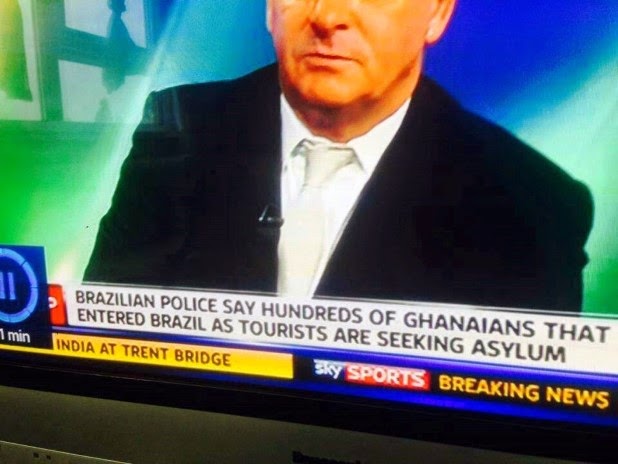 Hundreds of Ghanaians who entered Brazil as tourists to watch World Cup games have asked for asylum, police in southern Brazil said Thursday.
Noerci da Silva Melo who heads the Federal Police office in the city of Caxias do Sul said that over the past week 200 Ghanaians asked for asylum. The Justice Ministry will decide whether to grant their requests and in the meantime, they are allowed to work and circulate in Brazil.
The Justice Ministry did not immediately comment.
Melo said close to 150 of the Ghanaians have left Caxias do Sul for the states of Sao Paulo and Santa Catarina where they have a better chance of finding employment.
Melo said the Ghanaians said they were Muslims who were “fleeing the violent conflicts between different Muslim groups.”
He said they all entered Brazil legally to watch their country’s team play in Natal, Fortaleza and Brasilia. Ghana finished last in its group, losing to the United States and Portugal and reaching a draw with Germany.
Vanessa Perini Moojen of the Roman Catholic Church’s Migrant Support Center said the asylum-seekers “faced life-threatening situations back home.” She would not elaborate.
“They feel they can find work and better living conditions in Brazil,” she added.
The center provided temporary shelter for the Ghanaians at the city’s seminary and helped them prepare their asylum requests.