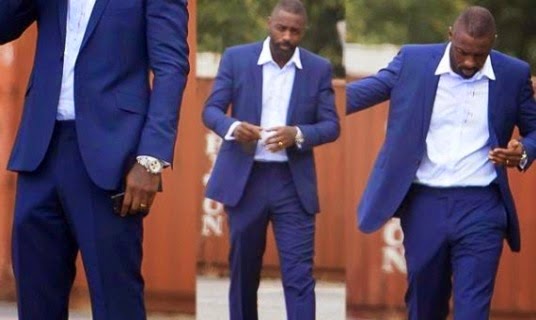 Meanwhile,I’m sure Idris is well endowed..but he’s not this well endowed. Hours after these pics of him with a massive bulge sparked a buzz on the internet, the actor took to twitter to explain that it was just a wire mic. He was on the set of a movie when the pics were taken. Mystery solved! Who gets someone this excited and just take the excitement back like that,lol..

Meanwhile, As the world continues to discuss the viral photos of what seems to be actor, Idris Elba’s huge bulge on the set of his upcoming movie “One Hundred Streets”, Ghanaians seem more amazed with his other gifts. Last week, YFM dropped sneak plays of VVIP’s remix to Selfie, which features Mr Elba himself, and the reception to his hooks has been nothing short of amazing

Most Ghanaians didn’t know of Idris Elba’s musical side, thus they’re pleasantly surprised to hear him rap – and even more so in the style he did! The remix sees the British actor, producer, singer, rapper, and DJ who is of Ghana and Sierra Leone roots, rapping in pidgin English and referring to Hiplife as his new wife. Idris also makes a cheeky reference to photobombing Oprah Winfrey’s much talked-about first selfie. In his hooks, Idris says “…ask Oprah who taught her how to selfie”.

The track is yet to be released and VVIP member, Reggie Rockstone is also amazed by the response from Ghanaians so far. He comments ” We just did a sneak play on Yfm with Ms Naa and people went for it in the biggest way!!! VVIP is about to really stir it up! My phone blew up on the spot! I think this is one of those times where the remix can burn the original! Idris certainly held his own on this one. Before people realize it’s him, they already praise him; and when the find out it is Idris, they freak out!”