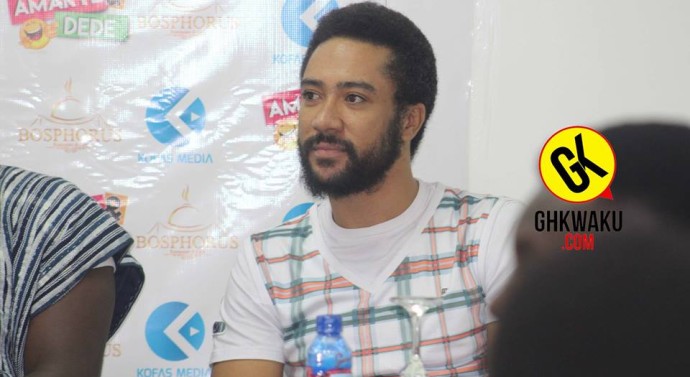 Ghanaian movie star Majid Michel has stated that he is not a Ghanaian actor but rather he is an actor from Ghana.

Majid made this statement which sounds controversial to some people at the press launch of Kofas Media’s new movie project “Amakye & Dede”.

During the Q & A section of the conference, Majid Michel was asked if there is a funny bone in him and if there is how he can make viewers of “Amakye & Dede” laugh when it’s finally out.

This question came forth because Majid has not been a cast for a lot of comic movies.

In respond to the question, Majid said that he believes acting as an art is universal, and every actor has a challenge that he wants to conquer

“Well I am an actor and I believe acting is an act, and art is universal… I am not a Ghanaian actor; I am an actor from Ghana. So I was there as an actor, and this director said he wants me for a film, and I said what is it about, and he said this is it.”

Majid also revealed that being in a movie with Kalybos will be a challenge to him as an actor.

“Every actor has his challenge in front of him every time that what is next to challenge me, what is next to say this will be a challenge, and he wants to take it on to prove to himself that ‘errm’ I have conquered the next challenge.”

“Well, you have to stick usually to what you are strong at unless you are daring to go otherwise and then if you fail you come back to say that ok this is not for me. Being in a movie with Kalybos will be challenging, and I can only see my success after the film, so if it fails I will stay off it but now let’s see what happens.”

Majid Michel has starred in a lot of local and foreign movies and is currently part of the cast for Amakye & Dede.