As Jon Germain celebrates 20 years of broadcasting this year, let us stay reminded that he is beyond just broadcaster, He is also a class-act musician.

Jon Germain is probably the proverbial prophet who isn’t revered in his home. With accolades and performances internationally, a song which is ranked 8th best love song in the world and Ghana’s only R’n’B album in the past two years, Jon Germain has what it takes to stand toe-to-toe with A-List musicians like Charlie Wilson.

The musician, who used to spot braids back in the day, was recently spotted at the Aburi Gardens, where he performed to a section of the international community in Ghana. 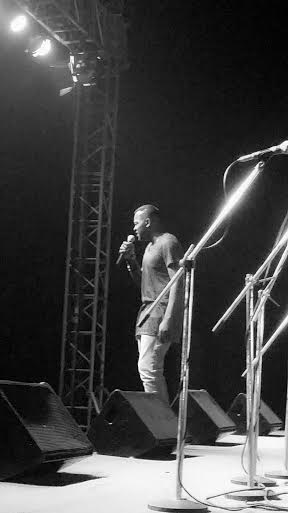 The event was the climax of the Regeneration Festival, which celebrated African culture and health, supported by the ministry of health and ministry of tourism. On the bill included the Oiada international Band, JahWi, Ras Aware and Jamaican dub legend Muta Baruka.

It was a surprise to see Jon Germain, listed amongst these reggae acts, as the only musician performing a genre outside the walls of reggae.

Spotting a simple outfit, Jon Germain took the stage with guitarist, Owura. He delivered a spectacular acoustic rendition of hits like, In My Head and Tell me.

At this point many seats on the grounds were empty, as many patrons approached the stage to get a better view of Jon Germain. Mr. Germain set the tone for the audience to get romantic, as many lovers found refuge in each others arms, swinging to the suiting sound of music.

After his performance, I caught up with Jon Germain, who disclosed that he is ready to drop new music.