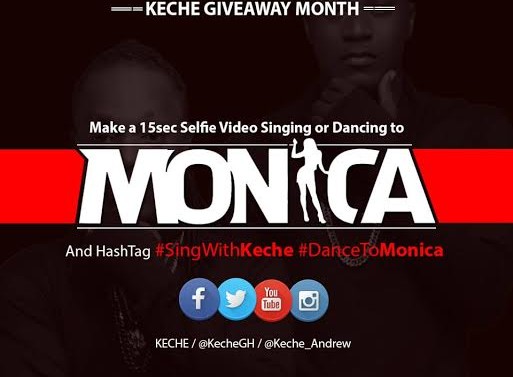 Management of hiplife duo, Keche has announced their intentions to surprise lovely fans of the group with lots of prizes.

The campaign dubbed ‘’Keche Give Away Month’’ is to show the groups appreciation to fans in the month of February.

To the duo, Joshua and Andrew, this is a great opportunity to give back what they can’t pay for, that’s the fans support.

‘’Ever since we emerged onto the mainstream scene, we’ve been shown exceptional support by fans and its very refreshing to give back to the people who offer us that motivation and reason to keep recording good music’’, Keche stated.

There will be lots of giveaways ranging from branded Tees, branded baseball caps, mobile airtime and video feature for four (2 males & 2 females) lucky winners who make the best dance moves.

How to participate is pretty easy, simply record a short video (15secs), post it on any social media platform, tag Keche with the captions #DanceToMonica and stand a chance of winning lots of prizes.

GB Recordz, the label Keche is currently signed onto is the brain behind this initiative.

Keche are currently busy working on new songs in anticipation of their second studio album, which will be released later this year.