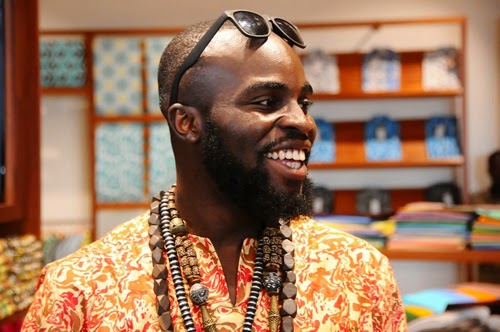 Award-winning rapper and songwriter, M.anifest on the ‘Hanging Out With KOD ‘ show over the weekend, revealed that when he was young, he wanted to become a watchman because he thought the watchman job was cool but he later found out that they aren’t paid that much.

He later went through different stages wanting to be a number of things; from being a pilot to a doctor and then to his father’s profession, lawyer, but never thought of becoming a musician.
Unlike most Ghanaian musicians who played for typical Ghanaian communities when they go abroad, M.anifest usually plays for different audience altogether. He recently went on a-three- week tour with Damon Albarn thrilling thousands with his electrifying performances. Paris, Poland, Berlin, Hamburg, Belgium, Barcelona, Switzerland were few of the places he toured. He revealed that the tour was such a thrilling one, amazing and a tour that he really exported Ghana to the rest of the world.

On how he treats negative vibes, he said, ”I’ve a very good sense of humour so I just laugh if off when I hear such things or when my fans on social media particularly on Facebook blast me. I just see it as something worthwhile taking a lesson from and through all these; I’ve developed a very thick skin. Lastly, I focus on whatever I planned doing so as not to be destructed by such negative vibes”.

When not in the studio writing or recording a song, M.anifest enjoys watching movies as well as watching reality shows and to this end M.anifest revealed that he has been selected as the third judge
for this year’s Vodafone Icons Remix Edition. He revealed that he really admires Lauryn Hill, Yvonne Chaka Chaka, and Naughty by Nature so much.

M.anifest lived in the States for 10 years before deciding to come back home. Not long after his return, M.anifest has become a household name and a force to reckon with in the industry with some awards such as VGMA Rapper of the Year 2013, Hip Hop Song of the Year 2013, 4stye Best Hiphop Music Video to his credit.

M.anifest cautioned Ghanaian musicians not to be seen as public toys, he said, ”Being a public toy, one won’t be respected that much and one will even get broke early in life”.

Rapper M.anifest, on the challenges facing the Ghanaian music industry, cited the lack of a big auditorium for events as well as not being paid royalties as some few examples. He had the following words of motivation for his fans and the rest of the world, – being sincere, being committed in life, being passionate, one must be curious and lastly see beyond today and also see beyond limitations.