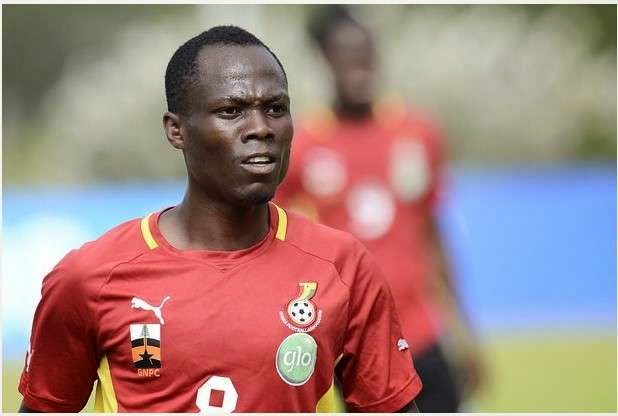 A strike form Christian Atsu gave Ghana a hard-fought 3-2 win over Togo in their AFCON 2015 qualifier on Wednesday.

With two automatic qualification spots for grabs in each group, Togo have a chance of reaching a qualifying to the African Cup Competition once again, after they reached the quarter finals in the 2013 edition in South Africa.

But Tchanile Tchakaka’s side took an early lead in the 11th minute through Jonathan Ayite against a Ghana side who is looking to qualify for their 20th African Cup of Nations.
Their hopes were thwarted by Asamoah Gyan and Agyemang Badu, though, as the as the Black Stars duo scored in the space of ten minutes- with Badu’s winning effort a cool header that came in the 34th minutes to spare Ghana’s blushes in the Group E clash.

Togolese skipper Emmanuel Adebayor grabbed a 77th minute equaliser for the home side, but winger Christian Atsu produced a moment of quality that broke the Hawks’ hearts and served as another example of why Everton secured his services on loan from Chelsea in the Summer transfer window.
Coach Kwesi Appiah made as many as five changes to his starting XI from the side that drew at home to Uganda on Saturday, with John Boye – injured on Monday – and Fatau Dauda, Jeffrey Schlupp, Rabiu Mohammed and Majeed Waris replaced by Awal Mohammed, Stephen Adams, Baba Rahman, Agyemang Badu and Jordan Ayew.

Coach Tchanile Tchakal maintained the team that lost 2-1 to Guniea on Friday.
Ayite grabbed the hosts’ first goal in the 11th minute after slotting in the ball through the arms Ghana goalkeeper Stephen Adams.

Asamoah Gyan soon levelled in the 24th minute after jumping high over defender Serge Ognadon Akakpo to pounce on Kwadwo Asamoah’s cross which left goalkeeper Kossi Agassa no chance.
Agyemang Badu made it two to the Black Stars team after he coolly headed home a Baba Rahman’s cross from the left flank, with the latter demonstrating why Kwesi Appiah chose him ahead of Jeffrey Schlupp.

The visitors enjoyed the better of the opening exchanges in the second half but were unable to break into the defence of the Togolese team.
Ghana continued to press and bother the Hawks’ defence, and they had few better chances than a header from Asamoah Gyan again – which was always flying over the crossbar.

But Togo were the team to score after an unmarked Tottenham striker Emmanuel Adebayor soared high above the Ghana defence to nod home an equaliser in the 77th minute.
However, Christian Atsu stole the well-deserved victory for Ghana in the 85th minute after he burst into the Togolose defence from nowhere with a calm finish in a five-goal thriller.