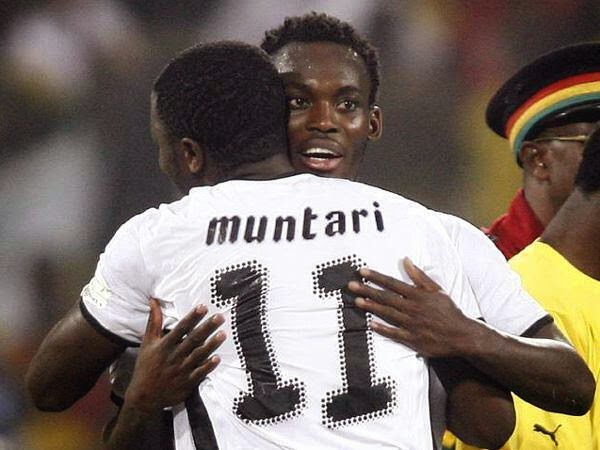 Ghana midfielder Michael Essien has given his full support to Sulley Muntari after his AC Milan team-mate was thrown out of the Black Stars camp at the 2014 World Cup for ‘unprovoked physical attack’ on Ghana FA executive at the tournament in Brazil.In his first comment since the dismissal of Sulley Muntari and Kevin-Prince Boateng for different disciplinary issues, Essien seemed to blame the Ghana FA for the dismissal of Muntari.The AC Milan star, who played a bit-part role

for Ghana at the World Cup, gave a brief reaction to numerous questions and appeals asking him to advice Boateng and Muntari over their reported indiscipline in the Black Stars camp and rather defended the actions of the duo.“@acheamponglilian advice your so call FA not Sulley,” the ex-Chelsea star replied to an Instagram comment when asked to advice his friend Muntari over the attack on Armah, the owner of one of Ghana’s leading clubs.Muntari is reported in the Ghanaian media to have launched a fisted attack on Ghana FA member Moses Armah during a meeting before chasing him up in his hotel room for further attacks resulting in his dismissal.The action has drawn worldwide condemnation for the AC Milan star who has been sacked from Ghana camps on several occasions over disciplinary issues.Simmering tensions surfaced in Ghana’s camp over unpaid World Cup appearance fees during a meeting in which Muntari launched an unprovoked attack on the Black Stars Management Committee member Moses Armah just before Ghana’s last game of the tournament in Brasilia.Boateng, who had a disappointing campaign at this year’s finals, was also thrown out of Ghana’s camp following a ‘stinking’ verbal abuse on Ghana coach James Kwesi Appiah – reports in the Ghana media say.The altercation, which the Schalke 04 star denies, led to his dismissal as he used the F-word on the soft-spoken coach.Essien, who played just one game at Ghana’s World Cup campaign, has received praise for his conduct in the Ghana camp as he had remained calm and collected through the confusing times.But his show of support for the duo is expected to change opinions.Moments after Muntari’s dismissal from the team’s camp, he quickly focused his attention on AC Milan where he has signed a new one-year contract extension.Ghana’s Youth and Sports Minister who was at the team’s camp in Brazil and his deputy have been dismissed by the Ghanaian President