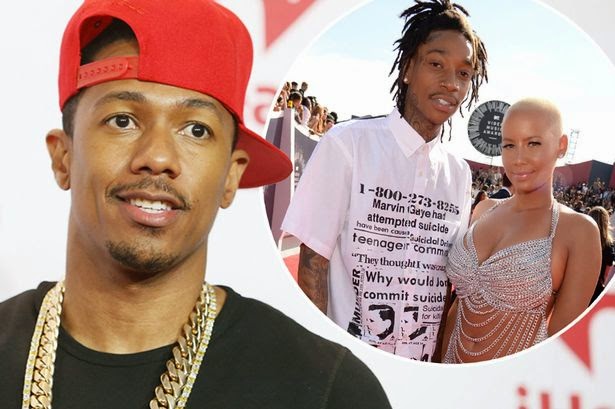 30 year old model Amber Rose, who the world thought was having the best marriage with her 27 year old musician hubby Wiz Khalifa, shocked everyone when she filed for divorce from Wiz, just weeks after their 1 year anniversary.

Rose, who used to date Kanye West, is asking for full legal and physical custody of their child, Sebastian, aged one, and is allowing Wiz visitation rights.

Divorce papers reveal the couple split on Monday and cited irreconcilable differences. Multiple sources tell TMZ that the split is bitter. That Wiz and Amber are each accusing the other of cheating.

Hours after news of the split broke, Mariah Carey’s estranged husband Nick Cannon’s name got tossed around as the trigger for Amber Rose’s divorce from Wiz Khalifa. Amber had recently gushed about him in an interview, she was hired as an actress in a movie that Nick Cannon wrote about his life, then she appeared on his show Wild n Out, and recently he became her manager which made everybody suspect they were getting too close for comfort.

But Nick is telling people that just isn’t the case. His people reached out to TMZ and according to them, Nick and Amber — who just recently got into business together — have kept things strictly professional.

‘He only learned about Amber’s domestic problems through her lawyers last week when he signed her on as a client. That’s when Nick says he found out her marriage was on the rocks and only then did the two share break-up stories. Nick insists NOTHING happened in the cheating department.”