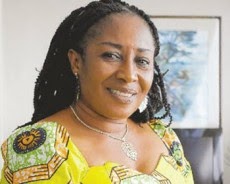 Veteran Nollywood star, Patience Ozokwo, popularly known as Mama G, is no dobt one of the most respect movie stars in the Nigerian film industry called Nollywood.The movie icon, who is well known for her ‘wicked mother/mother-in-law’ roles in movies, has decided to take her trade to the Northern part of Nigeria where she was featured in a recent movie titled ‘Hassana Da Hussaina.’The Hausa movie industry is fondly called Kannywood.The flick, produced by Uzee Concepts and directed by Hassan Giggs, is about an army general who arranges for his troublesome twin sons (Rabilu Musa Ibro and Suleiman Bosho) to get married. The boys got married to another pair of twins (Patience Ozokwo and Saratu Gidado), who prove to be even more troublesome than they were. This led to a bigger trouble in the family.Once again, Patience Ozokwo was in her element as she gave a vivid interpretation to the script.