Over the weekend, Singer and Songwriter Stephanie Benson was one of the award presenters at the 2017 Ghana Music Honours.

She became the center of attention when she walked on stage to present the Best Female Artiste plaque to MzVee because of her see-through gown. Some people were excited whilst others cringed at what they saw.

Some 19 people were honoured on the night for their outstanding achievement in the music industry.

Photos of Stephanie Benson below. 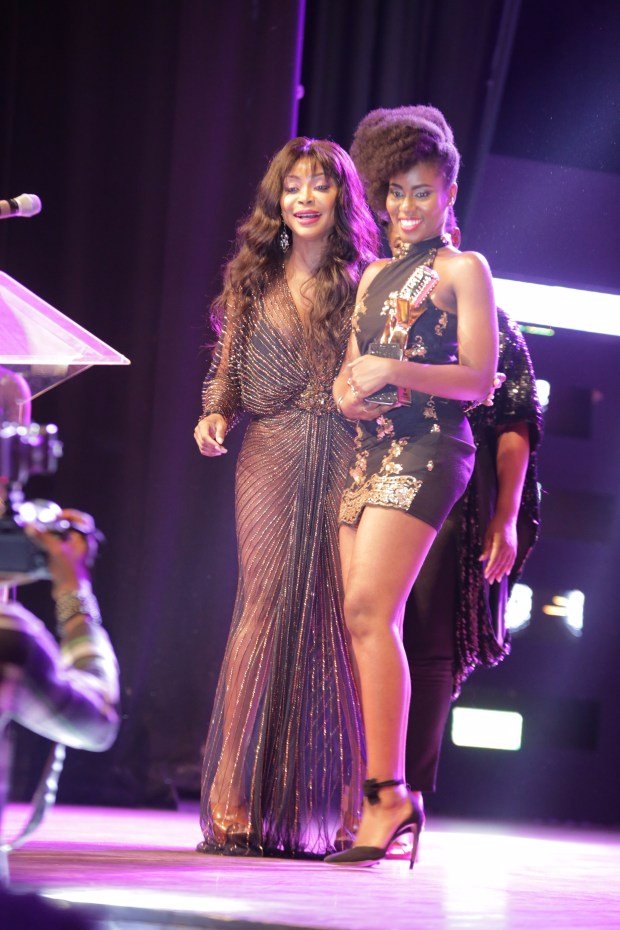 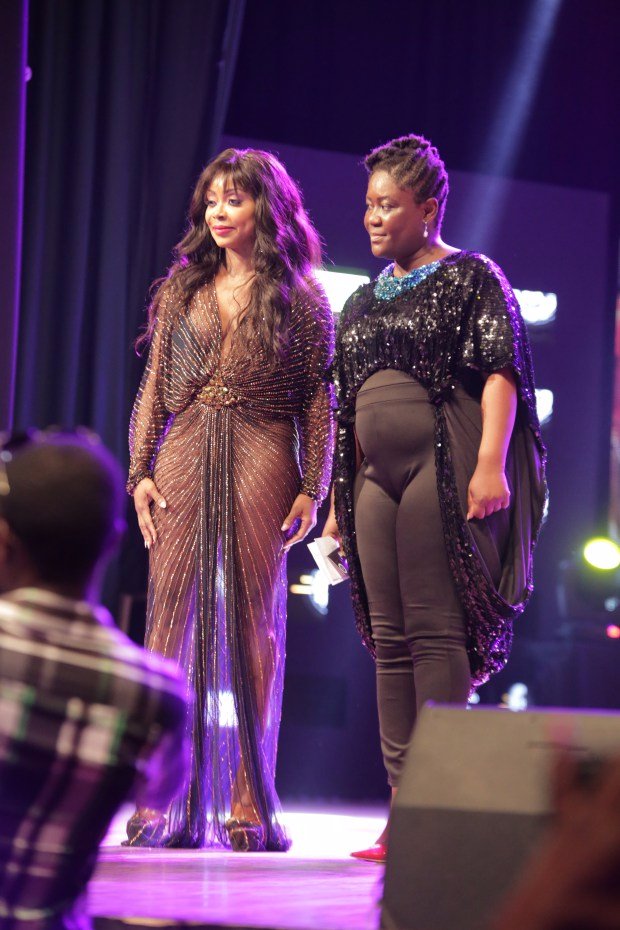 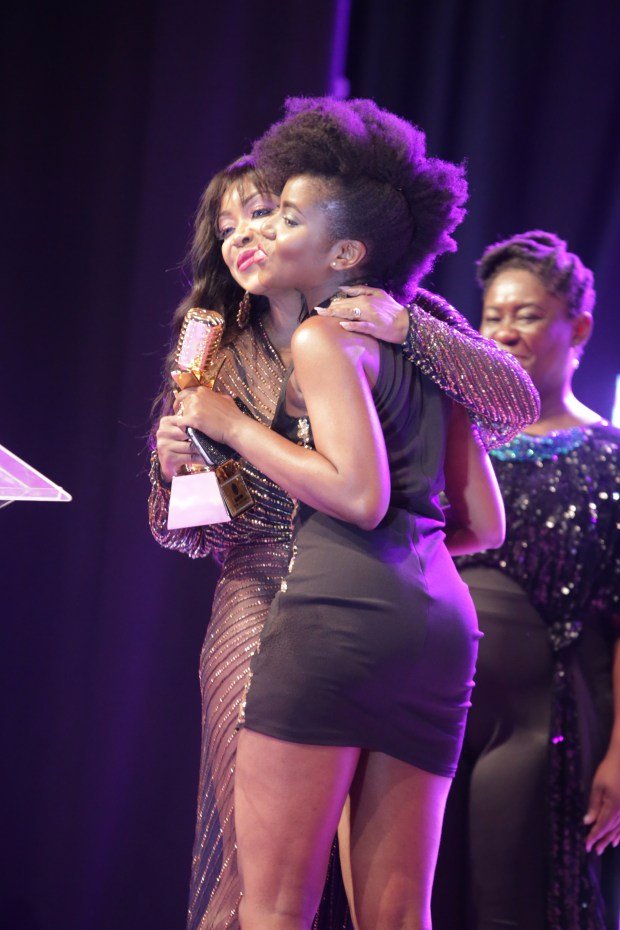 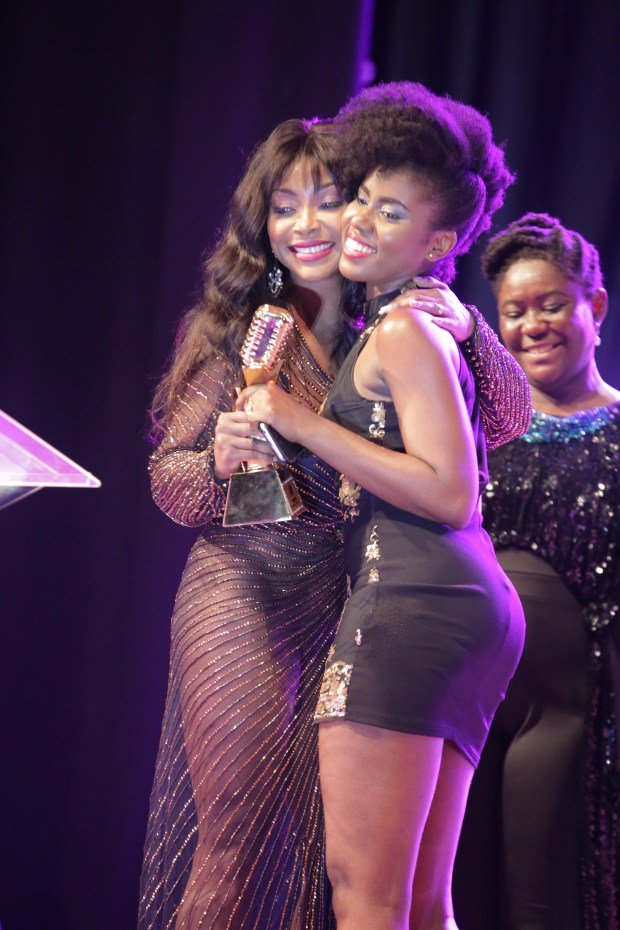 Benson was born and raised in Ghana to wealthy parents; a pharmaceutical millionaire and his fourth wife named Queen Nana Boahemah II who had seventeen children. She started learning how to play the piano when she was three years old and began learning how to play the violin and cello when she was enrolled at the National Academy of Music at the age of eight. She moved to London, United Kingdom six years later when her father died at the age of fourteen in order to be trained as Queen by her uncle.

Benson’s interests in playing the piano were developed as her father played the piano at night before bedtimes. While in London, she continued pursuing these interests eventually landing her a permanent position singing and playing at a famous nightclub. Her music career was commercially launched as she vocally supported some artists.

Benson was spotted by Pete Waterman, owner of PWL while she played at the nightclub in London. Waterman signed her to his label and she released a recording of her first single ‘Now is the Time,’ placing her in the top 20 on UK dance charts. Under this label, Stephanie embarked on promotional tour all over Europe till the termination of her relationship with PWL. Later on, she started writing and collaborating with some artists including Stevie Wonder, Wayne Vaughn (Earth Wind and Fire), Rob Davis (Kylie Minogue), Terry Britton (Tina Turner), Andy Hill (Bucks Fizz) and Danny Schogger (Celine Dion). Benson turned her attention to promoting her music by going solo through live performances with a band. She has since publicly and at private events entertained celebrities and important personalities including the British Royal household and Prince Charles who said to her upon hearing her sing the first time “You are one of the most amazing performers I’ve ever seen.

In April 2013, Benson announced the establishment of a music school named the Benson Entertainment Production Institute (BEPI) in Accra as a way of giving back to the Ghanaian society. BEPI is intended to promote professional international standards relating to stage performances and rehearsals, theatre shows, TV shows and musical concerts, training as well as to serve commercial purposes. The first performance of students from BEPI was in 2014 at +233 Jazz Bar and Grill, Accra.

Benson has publicly talked about surviving breast cancer after undergoing a total of 28 hours of surgery within three days. On March 19, 2016, at Labadi Beach Hotel’s Omanye Hall in Accra, she held a women’s gathering centered on her fight against breast cancer with the aim to encourage and strengthen women amidst music and words of exhortation. She went on to release her song titled Dear Lord at this event which was attended by notable women including Nana Ama McBrown, Michelle McKinney-Hammond as well as singers Akosua Agyapong, Irene Logan, Yaa Yaa and Becca.

Benson is related to Ghanaian gospel singer Akosua Agyapong. She met her husband John in 1989 when she worked at De Beers for her uncle. The two got married after three years of dating and with her mother’s approval while Benson accepted to remain in London with John. They have five kids and own a chocolate shop located in The Pantiles, Royal Tunbridge Wells, Kent.

Benson has performed at events hosted by the British royals including Princess Anne and reportedly exceeded her 15-minute allotted performance time for Prince Charles to approximately an hour because he enjoyed her act.[13]

She received another invitation to sing for Prince William before his wedding to Kate Middleton on April 29, 2011.