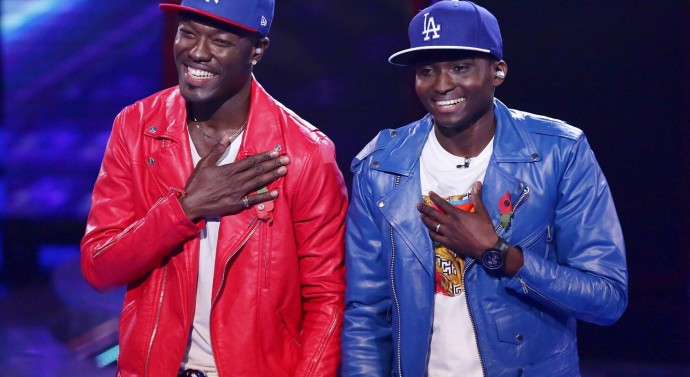 Reggie N Bollie were second last year at UK X-Factor reality show. Reggie, half of the duo has been accused of cheating on his wife. This according to UK’s daily star was done through text

According to Daily Star UK, Marie (a fan) who believes she has been used described Reggie as fake.
Read the account.

““Being a good husband and dad is Reggie N Bollie’s brand but in Reggie’s case it’s a fake.
“He is living a double life.
“I thought he liked me but he just used me and then dropped me.”
Marie told how she and Reggie – real name Reginald Kojo Ainooson – exchanged more than 500 texts as he shot to fame on The X Factor.

He even called her from the toilets at Wembley as he waited to go on stage and sent her suggestive messages on the way to a concert in Farnborough, Hants.

In stark contrast to his family man image, Reggie, 31, pestered Marie for explicit pictures and asked her to perform a sex act on video for him as his wife was back home looking after their children Ikhon, seven, Nolan, five, and Dior, one.

Marie, from Canterbury, Kent, initially contacted Reggie on Instagram in October.She left a message telling him she was enjoying his performances – and was shocked when he replied. Marie said: “I didn’t expect to get a reply. He thanked me for the compliment.

“I said ‘oh if you want, add me on WhatsApp’ but I wasn’t expecting him to.“Then out of the blue he just messaged me and said ‘I’ll call you tomorrow’.”Reggie rang on November 27 and then added her on the free messaging service. Soon his messages became seriously fruity.Marie said: “He said I was beautiful and that he loved my shape. It was intense.
“He was saying he could spend hours feasting his eyes on my body.“He wanted video, pictures, the lot. Fortunately I never sent anything like that.”Reggie’s raciest messages to Marie came as he was preparing for the X Factor final.He said she “stirred” his manhood and told her: “You need to be punished hard and long” before adding “I just want to bend you over.”Reggie even said he had thought about her on stage in front of judges Rita Ora, Nick Grimshaw, Simon and Cheryl Fernandez-Versini.
But after 30 phone calls and hundreds of texts – many too explicit to print – Reggie started to go cool on Marie. By this time Reggie N Bollie had landed the runners-up spot behind student Louisa Johnson, 17, and looked set for the big time.
On December 28, Marie rang him but a woman answered the call.Moments later, she received a text saying: “Hahaha I know everything.” Marie added: “He blocked me on WhatsApp and changed his number. He had his fun then dropped me.”
A spokesman for Reggie confirmed he was in communication with Marie but is no longer in contact with her.He added: “Reggie never met this woman – and is not in communication with her.”