Home / Entertainment / Stepmother, 48, marries her stepson, 45, making her child both his half-sister and his step-daughter
Let people Know about this
90
SHARES
FacebookTwitterSubscribe 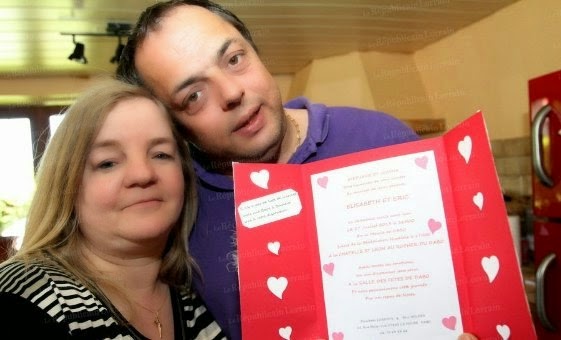 Not only did French woman Elizabeth Lorentz, 48, marry her 45 year old step son, Eric Holder, but her ex, who is Eric’s father even attended their wedding. Yes, you read right.

Lol. Kolo people!
According to French daily Republicain-lorrain.fr, Elizabeth married Eric on Saturday October 4th in the parish church in the small village of Dabo in Alsace-Lorraine, north-east France, after fighting for months with French authorities for the right to marry him.

About her separation in 2006, Elizabeth told RL

“I was not expecting it, it was a shock. I was an adult so I made do. But our daughter who was nine-years-old felt the separation very badly. She cried every day. That’s when Eric was a great support for us and our relationship evolved.’
Speaking about the situation, Eric, who also has a daughter, said he did his best to comfort his half-sister, who is now his step-daughter,

‘When my father left my mother, I felt abandoned. I knew how she felt. So I had to be there for both of them’
Eric and Elizabeth soon began an affair that was frowned upon by many. And when they decided to marry, French law, which prohibits all unions between step children and step-parents – even former ones, would not allow it.

The couple fought the law and finally obtained a right to marry from a local court and the day they married, Eric’s father, who now supports the relationship attended.

“Eric’s father, who is also my ex-husband agrees perfectly our history. Our girls too. They have almost the same age and consider themselves sisters. We never differentiate between them. I simply hope that our story will be useful to other couples in our situation, because I know there are some’ Elizabeth told the French newspaper…