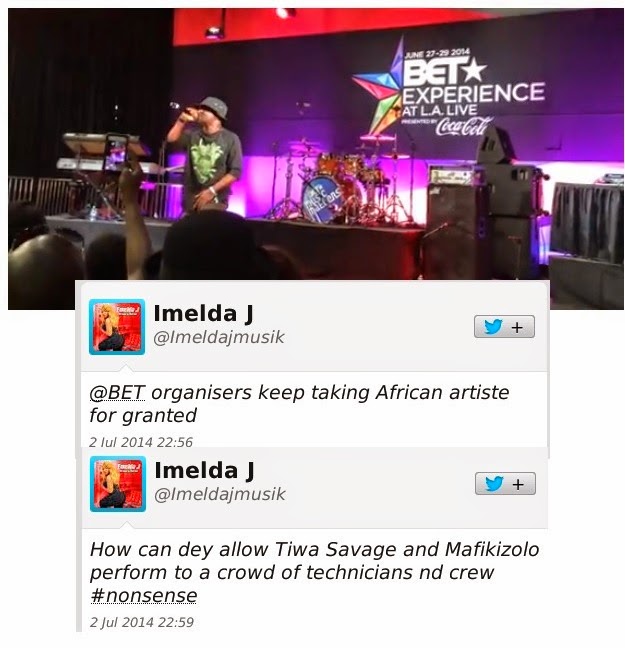 If you think you’ve seen or heard the worse about how BET treats and subjects African artistes to ridicule, then his may break your nerves…
Over the years, many Africans have called BET Awards organizers ‘piss takers’  and have questioned why the organisers continue to nominate African artistes and present their awards to them at back stage.
This year’s BET Awards’ organizers came up as having done

something extra for the various nominated African artistes, by staging a mini concert called ‘BET Experience At LA Live’ where Sarkodie, Tiwa Savage, Mafikizolo and others performed.

The event was hosted by Ghanaian actress-Nadia Buari and Democratic Republic of Congo’s music star-Fally Ipupa.
Few days after the above event and the main BET Awards, it is being alleged that, the crowd our African top artistes performed to at the ‘BET Experience At LA Live’ was FAKE; they were Decorators, Cleaners and Technicians who were working for BET.
Nigerian Afro Pop Artiste-Imelda J has taken to twitter to blast organizers of BET Awards to stop humiliating & treating our top African Super Stars like “crap”.
According to the Imelda, her cousin was among the BET stage technicians that worked on the 2014 BET Awards and the cousin has confirmed that, the African artistes performed and jumped around on stage to a fake crowd—not real fans as it would be expected.
If what is being alleged is true, BET Awards organizers seriously need to sit up and deal with our African artistes in a deserving manner..