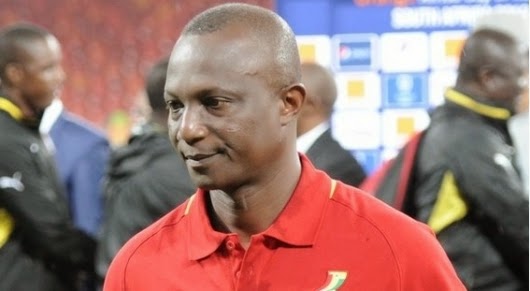 Dismissed Black Stars coach, Kwasi Appiah, has rejected an offer of $100,000 as severance package from the Ghana Football Association (GFA), following the termination of his two-year contract after just two months.

The GFA offered the amount when it met Appiah Friday to inform him of the decision to relieve him of his services, but the 54-year-old coach rejected the offer.

According to a statement issued by the GFA, both parties have agreed to meet next week to conclude talks on the severance package.
Graphic Online sources indicated that during the meeting, Appiah demanded to know why he was sacked and also asked that an official sack letter be made available to him. The FA, according to the sources, promised to make the letter available to him by Monday.

Appiah was relieved of his post Thursday.
The FA said both parties agreed to “mutually part ways”.
“The GFA wishes to thank Mr Appiah for his diligent service to the country as the coach of the Black Stars for the past two years. We wish him every success for the future,” the FA said in a statement Friday.

No reason was given by the FA for the dismissal, but the decision follows a loss of confidence in his ability by players of the Black Stars and officials of the Ghana Football Association (GFA) and  the Ministry of Youth and Sports.

Players like Kevin-Prince Boateng and Adam Kwarasey have been vocal in their criticism of Appiah’s technical decisions, with the 27-year-old Schalke midfielder describing him as a good man, but a bad coach.

After Ghana were held to a 1-1 draw by Uganda in their first match of the AFCON qualifiers, the GFA resolved to sack Appiah if he went on to lose the following match against Togo in Lome.
Though Appiah managed to come away with a hard-fought 3-2 victory, the FA deemed his performance to be unsatisfactory and decided to get rid of him anyway.

Appiah’s technical team has also been disbanded. But Assistant Coach, Maxwell Konadu, will remain in his job.
Appiah will be replaced by his former boss, Milovan Rajevac, who has arrived in the country and has been interviewed by the FA.

Rajevac, who returns to the team four years after leaving the job upon expiration of his contract, has already told the Ghana News Agency (GNA) that he cannot wait to get into the job.
“I cannot wait to join the family again. I am very excited to be back here; my second home. It is always relaxing and I love it here,” he said earlier in the week.