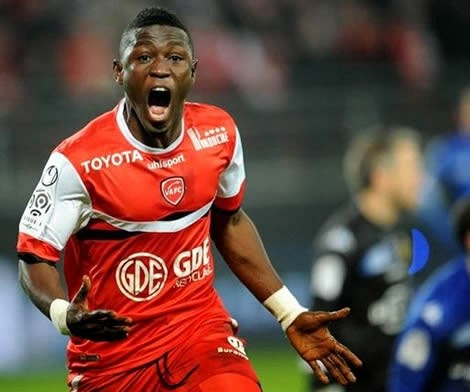 Ghana striker Abdul Majeed Waris picked up a minor injury during Tuesday’s first pre-World Cup training session in Accra but returned to join his colleagues.
The in-form goal poacher limped off the pitch after collided with goalkeeper Fatau Dauda
Waris spent almost 15 minutes on the touchline and had injured right ankle bandaged.
He managed to lift himself up and walked steadily afterwards as he joined midfielder Kwadwo Asamoah to sit behind one of the goalposts to watch their team-mates continue the training.
He was able to walk after the training without any help which shows that the injury was not serious despite showing signs of pain when he clashed with Dauda.
The Spartak Moscow player, who spent the just ended season on loan at French Ligue 1 side Valencoennes, scored nine goals in 15 Ligue 1 appearances.
Waris was among 14 players who took part in the first training session at the Accra Sports Stadium.
Tweet