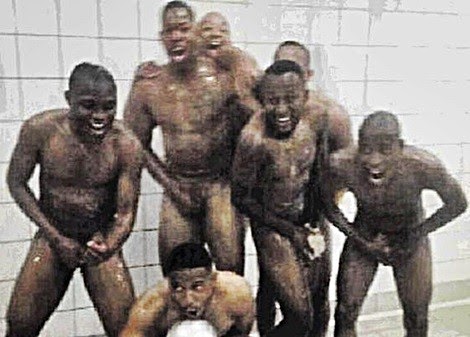 Ghana goalkeeper Fatau Dauda’s Orlando Pirates teammates could face a disciplinary inquiry after a photograph showing them posing naked in the showers with a trophy appeared on social media.

The players covering their genitals with their hands in the dressing room showers alongside the Nedbank Cup trophy following their victory in the final last Saturday.

Pirates administrative manager Floyd Mbele told the South African Press Association on Friday that those involved could be disciplined, although he said “this is the first time that we are dealing with such an issue in the club.”

Mbele said the photo being made public and not the celebrations was the problem.

“Who are we to condemn players for celebrating?” he said. “I mean you can ask most sports codes and it’s something that happens, so this is not unique to Pirates. The fact that it’s out in the media is another thing. But how many players get into their dressing rooms and do funny things after winning matches?”

The players shown smiling and covering their modesty apparently include current South Africa internationals Lehlohonolo Majoro and Thabo Matlaba. MidfielderThandani Ntshumayelo took responsibility for initially posting the photo on social media. He apologized on Twitter, saying “at the time I thought it was a joke, sorry to my teammates.”

Ntshumayelo is one of the players in the photo and is crouching naked behind the trophy and appears to be hugging and planting a kiss on it. Some of the players are wearing flip flops but nothing else. It was unclear who took the photograph.

South African newspaper The Times said on its website: “Next season’s Nedbank Cup winners might have to sterilise the trophy.”

Orlando Pirates is one of South Africa’s biggest clubs. It came from a goal down to beat Bidvest Wits 3-1 in the season-ending Nedbank Cup final, the country’s version of the FA Cup final, at Moses Mabhida Stadium in Durban last weekend