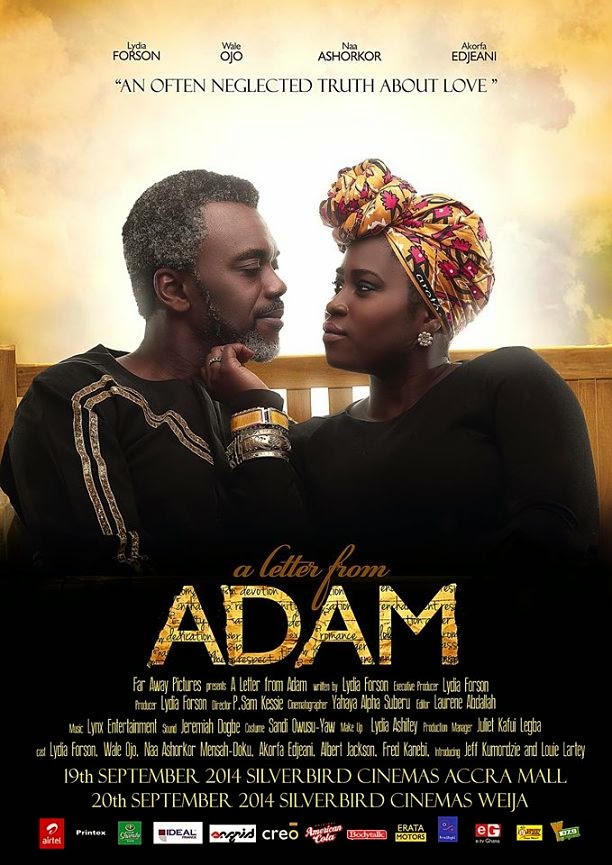 Lydia Forson has confirmed reports she is the producer behind upcoming movie, A Letter From Adam.

The actress took to social media facebook on Monday afternoon to make the announcement in a touching write-up about her past life.

Though Lydia was not categorical that the movie was about her, she drew inferences to create such an impression.

The new movie which features Akorfa Edjeani Asiedu, Wale Ojo, Naa Ashorkor and others will hit the big screens next month.

Below is Lydia Forson’s confession;

“I’ve been trying to write this post for a while now, but I just can’t seem to find the right words.

For someone who loves to write and talk as much as I do, this is rare. So I’m going to put down whatever comes into my mind and I hope it makes some kind of sense.

In 2010, I went through a series of challenges in my life that left me struggling to find the will to live. I wasn’t suicidal, far from it, but I just didn’t have the will or desire to do anything. I didn’t go out, cut off friends and turned down jobs. Basically a light had gone off inside of me and I didn’t know how to turn it back on.

I’ve always been a private person and so I didn’t know who to confide in. The few people I did talk to I couldn’t bring myself to tell them everything I was going through.

The solution for me was to get as far away from anyone or anything that reminded me of what I was going through. I began to take jobs outside Ghana, mostly because I enjoyed the idea of being somewhere I didn’t have to deal with my issues. One job after the other and I found myself practically living out of my suitcase. I began to get excited again, but they weren’t kidding when they said “You can’t run away from your problems.”

Although the trips were exciting and I was enjoying working in other countries, I always had to come home, and home meant coming face to face with the real me.

During this period a lot of people speculated about my absence and even though some of the reports hurt me, nothing could hurt more than the issues I was dealing with, and so I let the speculations go on and I didn’t care much.

But in this dark phase of my life, I still had people who were interested enough to check up on me, and although they didn’t push for too much information they said enough to let me know they were there, and not going anywhere.

I needed to find a solution to heal my pain, I needed to figure out how to move on with my life again, but I really just didn’t know how.

I prayed and did the routine Bible reading. But the truth is, I didn’t even believe in the prayers I said; I only prayed because I thought it was the right thing to do.

But God didn’t give up on me, in fact he wasn’t done with me just yet, even though a part of me was done with him.

And so one day after a trip, I just took my laptop and began to write.

I didn’t even know what I was writing, just that it felt good to write again.

It gave me an escape and every time I wrote I felt a weight being lifted off me. I didn’t write anything religious or overly deep. I just started writing a story and before I knew it I couldn’t wait to get up and write each day.

In about two weeks I had finished a screenplay. I didn’t know what I was going to do with it. But it had become my go to for comfort. Whenever I was down I wrote, whenever I was happy I wrote. Everyday I had something new to add or remove. The story was my baby and I wasn’t going to let it go.

This was my little secret and I wasn’t too comfortable with people even knowing it existed. Except a few who I trusted enough to let them read it.

Years later I still would go back to this story whenever I felt like I was losing it again.

Early this year, in an insane twist of events, I found myself being forced to produce a movie much earlier than I had planned to. I didn’t have the resources and I just didn’t think I was ready to take on such a challenge. But again God had other plans for me, and when the time came to pick a story, I felt myself drawn to my little secret.

But I wasn’t sure if I was ready to share it with the world. I didn’t think people would even get it. But I figured, why not, if I’m going to take on this scary project why not with something that has seen me through some of the worst times of my life.

And so the production of “A Letter From Adam” began.

It has been one long journey, filled with several moments of ” What the Heck I’m I doing.” But at every turn God has been there to direct my path. And I’m proud to say, it is all almost over. Thanks to everyone who has been a part of my story, knowingly and unknowingly. If you do get a chance to see this movie, remember that it is about the story and the amazing team of people who made it possible, and not in any way about Lydia Forson the Producer…