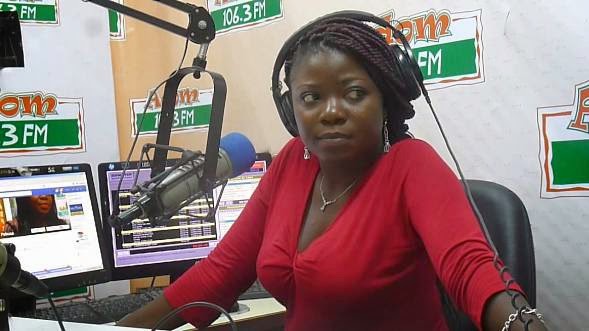 Adom FM’s Afia Pokua and two other journalists were Thursday afternoon brutalised by the Manager of the National Health Insurance Scheme at Ablekuma in Accra.

The three journalists were physically assaulted at Ablekuma, Flamingo- Zongo Junction.
Nana Sefa, a reporter with the station, had gone there to report on the frustrations and complaints of persons who had been queuing since 3am to go through biometric registration, but had his mobile phone confiscated by Mr. Israel Kwame Laryeah, the Scheme Manager of the NHIS there.

Mr Laryeah detained the reporter, insisting he would only release him if his Editor came there.
But things took a different turn when Afia Pokua also known as ‘Vim Lady’ got there in the company of another reporter, Kofi Assan.

According to Kofi Assan, the Scheme Manager released Nana Sefa after he and Afia intervened.
But the journalists walked out of the Manager’s office to a hostile crowd which accused the young reporter of going to hide in the Manager’s office, leaving them to their fate.

Attempts by the News Editor, Afia, to explain things to them infuriated Mr. Laryeah who pounced on her and assaulted her badly after they were bundled by the officials, while they sustained visible injuries.

Hassan said he received severe beatings too when he tried to defend his editor.
He said his clothes were torn in the ensuing scuffle.

This is the second time in less than a week that journalists from the Multimedia Group Limited have survived attacks in the hands of public officers.

Last Saturday, Felix Akunor, a driver with MultiTV and two journalists, Solomon Joojo Cobbinah and Festus Jackson Davies were arrested on the orders of the Mayor of Accra, Alfred Vanderpuije while covering a story on the plight of some displaced people at Mensah Guinea in Accra, following the demolition of their structures the previous day by city authorities.
They have been charged with offensive conduct.