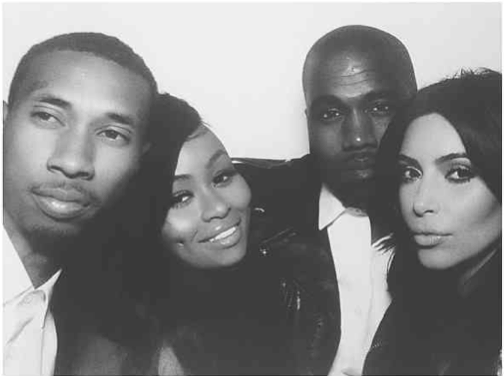 It’s official! Kanye West and Kim Kardashian just said their “I Do’s” and they are now Mr. & Mrs. West. Photobooth pics from what looks like the reception have hit the net.  Blac Chyna & Tyga posed with the newlyweds and John Legend & Chrissy Teigen also posed it up. 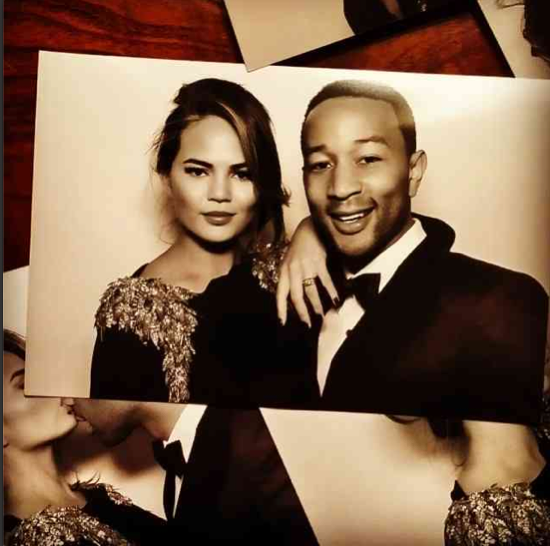 Adorbs.
UPDATE [8:25pm EST]:
–According to Extra, “The Italian city [of Florence] holds a special place in the couple’s hearts because they conceived their almost 1-year-old daughter North there.”
-Rob Kardashian was spotted arriving back at LAX from Paris…around the same time as the wedding.  According to Daily Mail, he was upset about what he called “superficial B.S.”, and left.
-Kim pictured at the altar:

UPDATE [6:15pm EST]:
The entire West family was dripping in Givenchy for the big day. Kim took Kanye’s hand in marriage in a white lace Givenchy Haute Couture gown (above). Yeezy was also in Givenchy, rocking a custom-designed tuxedo

and little North West wore a Givenchy dress similar to her mother’s. Nice.
……
After wreaking havoc in Paris all week, Kanye West and Kim Kardashian–West are finally married.  Let us all breath a sigh of…”Finally Jesus”.
The coupleexchanged their vows in a “private” ceremony in front of family and friends

at the historic Forte di Belvedere in Florence, Italy.
According to E!, ‘Ye and Kim (pictured above in their April 2014 VOGUE issue) headed down the aisle today (Saturday) towards a massive wall of flowers (similar to what he copped her for Mother’s Day) at the 16th-century-era fortress atop a hill near the Arno river. Kim’s sisters Kourtney, Khloe, Kylie and Kendall made up her bridal party, while her step-dad Bruce Jenner walked her down the aisle as Andrea Bocelli sang.
Celebrity event planner and longtime Kardashian family friend Sharon Sacks coordinated the couple’s wedding (who also planned Kim’s baby shower

and wedding to Kris Humphries) while a pastor from Miami, Rich Wilkerson Jr. performed the ceremony.
A source revealed to PEOPLE that Kanye became nervous before the ceremony saying,

“It was funny how nervous he was. He clearly knew the gravity of what he was about to do. This morning he was all smiles, but as it got closer, you could see that the nerves were kicking in. It’s common for most grooms. I’ve seen it all before.”

The wedding attendees applauded the couple twice during the ceremony, once when they shared their kiss and again when they were presented as Mr. & Mrs. West. Of course, Kris Jenner was seen wiping away tears of joy, but everyone was all smiles at the end. 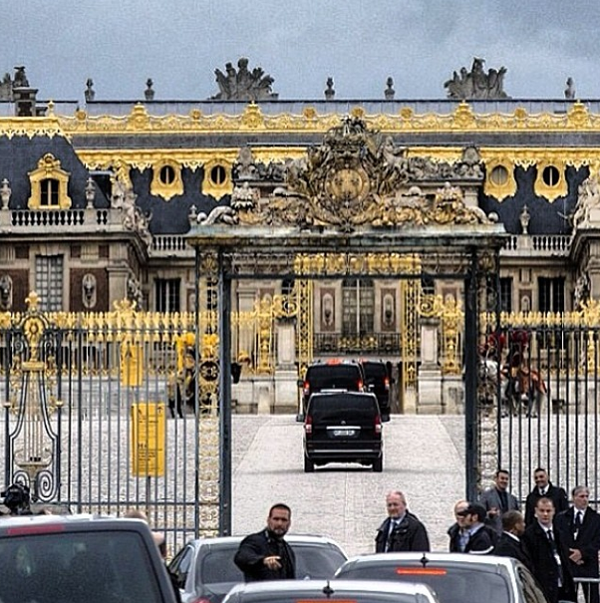 The jets have landed. Everyone’s dressed. And now it’s time for the big ceremony. Deets & pics inside, if you can stomach the overload…
Kanye West and Kim Kardashian’s “wedding

of the century” is now underway and we have the pics of their wedding party and guests making their way to the lavish ceremony. Attendees were flown in on private jets to their final wedding destination in Florence, Italy.
Kris Jenner posted the entrance of the wedding’s venue

(above) with the caption, “Uh huh Honey…..#herecomesthebride”. You already know she’s soaking this up like it’s her own wedding. 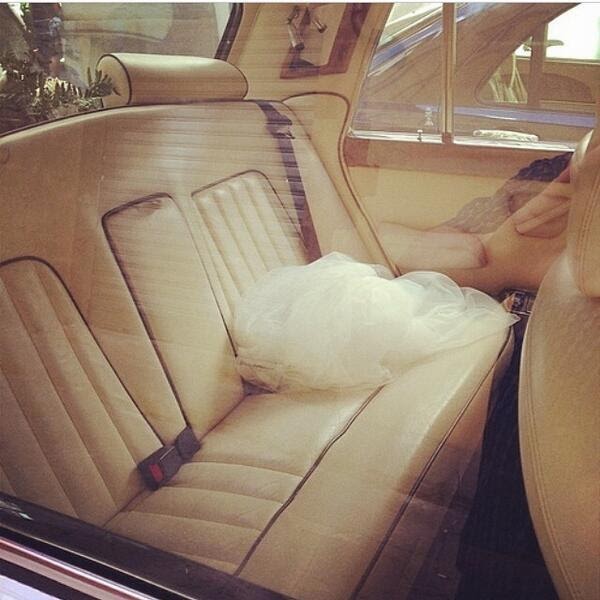 Here’s a shot of Kim’s veil being transported to the venue. 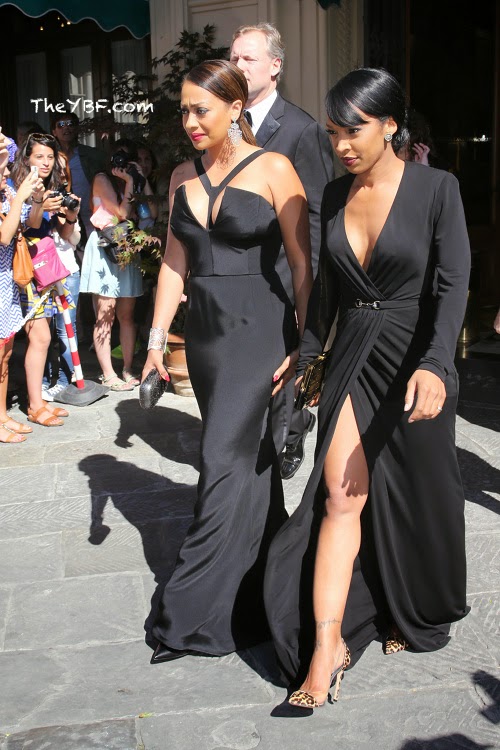 Looks like Ye suggested guests wear all black. LaLa and Malika were spotted looking fab in all black gowns as they left their hotel

on their way to the wedding venue. 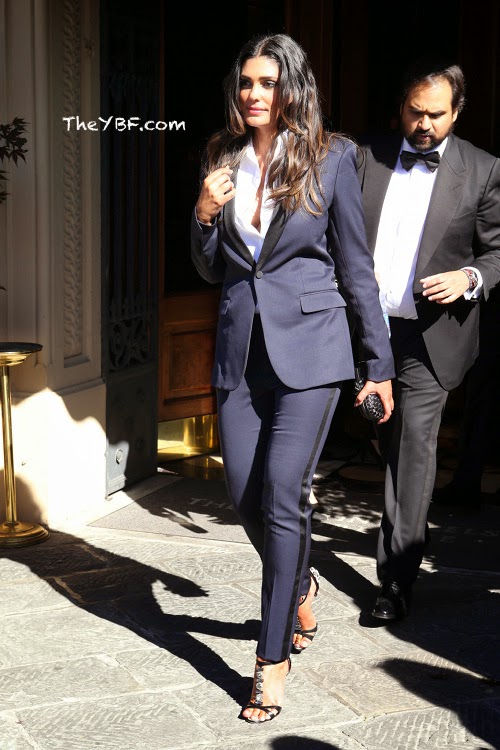 Kimmy’s bestie Rachel Roy (who was in the middle of the CARTERGATE scandal weeks earlier) looked nice in a black suit. 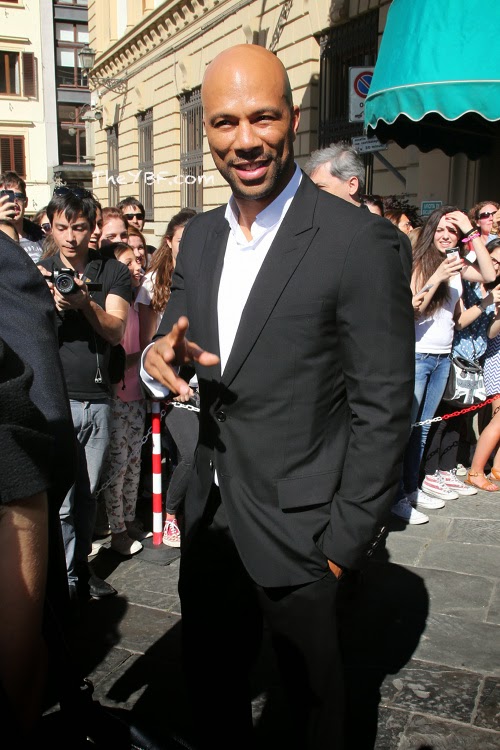 Common looked dapper in all black making his way to the ceremony. 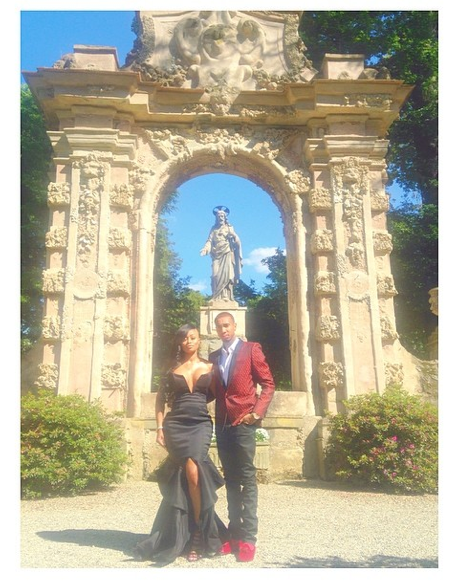 Looks like Tyga and Blac Chyna stole their looks (and their arrival looks) straight from Kanye and Kim’s closet. Chyna rocked a custom Michael Costello gown for the occasion.  The couple got their sexy as on they posed it up in front of an elegant arch & sculpture. 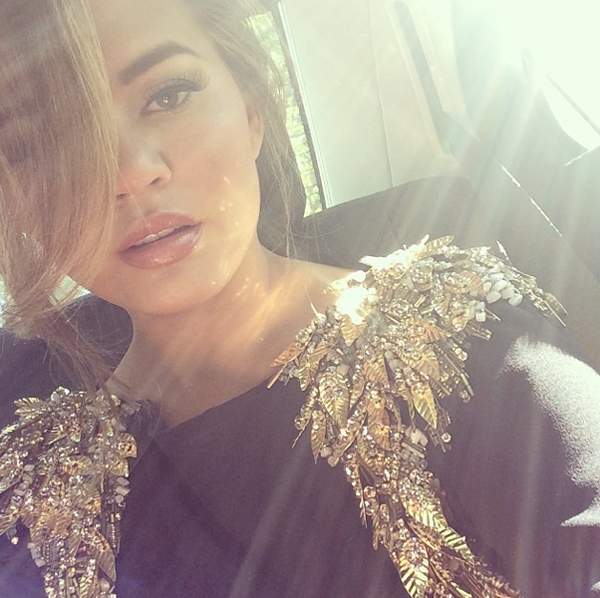 Chrissy Teign gives us a glimpse of what she’s wearing to the ceremony.
And Scottie Pippen and his wife Larsa were spotted as they arrived at the venue:
Photos/Videos: Splash/Loren’s IG/Tyga’s IG/Kris’ IG/@eonlinebrasil culled from theybf.com