Home / Entertainment / AS IT HAPPENED: NIGERIA EDGED OUT OF WORLD CUP BY DOMINANT FRANCE
Let people Know about this
72
SHARES
FacebookTwitterSubscribe 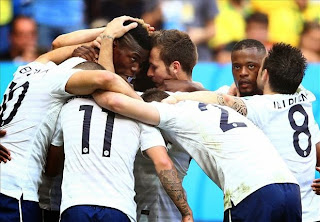 Nigeria goalkeeper Vincent Enyeama went from hero to zero as his error helped France to a 2-0 FIFA World Cup last-16 triumph.
Enyeama, who plies his trade with Lille in the French top flight, made sensational saves from Karim Benzema and Paul Pogba, but the latter capitalised to book a quarter-final place when the keeper flapped at a 79th-minute corner in Brasilia.
A Jospeh Yobo own goal in stoppage time further compounded Nigeria’s late misery.
The African nation entered the match under the cloud of a dispute over bonus
payments with the Nigeria Football Federation, but Stephen Keshi’s men played a full part in an entertaining goalless first half.
Emmanuel Emenike thought he put Nigeria ahead, only to fall foul of a marginal offside call, while a stunning stop by Enyeama somehow prevented Pogba from volleying France in front.
As in the first half, France weathered pressure and finished stronger – Victor Moses’ goal-line clearance and further heroics from Enyeama denying Benzema either side of Yohan Cabaye clattering the crossbar.
And Pogba headed into an unguarded net before Yobo put through his own net to set up a last-eight tie for France against either Germany or Algeria on Friday.
Nigeria’s pace and drive in attack left France disorganised early on and when Olivier Giroud hacked over from Benzema’s 15th-minute pass, it marked a rare moment of encouragement for Didier Deschamps’ team.
Emenike was similarly off-target from a promisingly placed free-kick, before the Nigeria forward was denied by a 19th-minute offside flag.
France right-back Mathieu Debuchy breathed a sigh of relief having horribly sliced a clearance to Ahmed Musa, whose low cross was touched home by Emenike at the near post.
Enyeama made a remarkable reaction save after Pogba drove forward and smashed a 23rd-minute volley goalwards on the end of Mathieu Valbuena’s return cross.
A drop in tempo around the half-hour mark clearly suited France, but Debuchy could not capitalise when a patient spell of possession sent a half-chance his way.
The Newcastle United defender was wasteful again in the 40th minute having been teed up by the impressive Valbuena.
A frantic close to the half matched its opening, with France goalkeeper Hugo Lloris far from convincing behind a speculative Emenike drive.
Peter Odemwingie – the match-winner in Nigeria’s decisive Group F victory over Bosnia-Herzegovina – tested Lloris with a 65th-minute drive that bounced awkwardly, while tension in the French ranks was increasingly shown by sloppy errors in possession.
But Deschamps’ men came agonisingly close to leading with 20 minutes left as Benzema exchanged passes with Giroud’s replacement Antoine Griezmann.
The Real Madrid forward’s effort was partially stopped by Enyeama and Moses was back to hack clear as the ball looped towards the net.
Benzema’s low cross was cleared for Cabaye to thunder a rasping shot against the bar and Enyeama excelled himself again to keep out a Benzema header.
But he erred from Valbuena’s resulting corner as France took the lead, making a later outstanding stop to thwart Griezmann seem particularly cruel.
Nigeria’s defence became disjointed in the closing minutes and Yobo’s own goal under pressure from Griezmann made the defender’s 101st cap one to forget.
The last five times that France have taken part in the knockout stages of the World Cup, they have reached the semi-finals or better. Now Germany or Algeria stand between this sequence continuing.