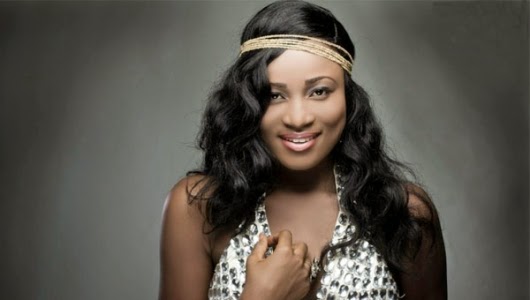 Wannabe actresses eager to make their way to the big screen   do not need to sleep with producers and directors in order to jumpstart their movie careers.
This is according to half Ghanaian-half Nigerian actress, Christabel Ekeh, who has moved to dismiss the perception that young actresses like her sleep around to get movie roles.
Speaking to Showbiz on Friday, the beautiful actress said while it was true that some actresses are deceived by some men in the industry to sleep with them before they get movie roles, she was proud  that she had remained a good role model for upcoming actresses in the industry today.
“It took a lot of sacrifice, hard-work and dedication for me to achieve the little that I have as everybody in the industry saw how I came up.
I struggled initially to land good movie roles and for me, the biggest struggle of all was getting from the not-so-well made movies to the big screen.
“ I had to be patient and bide my time to eventually land the big movie roles and not a single person in the industry can say that I slept with a producer and I was given a lead role.
Today, I am happy that I didn’t get anything I’ve achieved so far through the easy back door,” she told Showbiz.
Christabel, however, noted that it is common occurrence in the movie industry for young actresses to want to cut short the long path to fame and fortune due to the simple fact that it is dominated by men but she says that it is mostly desperate people who get taken advantage of in this way.
“Most of the time, young girls go for auditions and unfortunately, come across some bad people, who might not even necessarily be producers or directors, probably production assistants.
They deceive them by saying they can link them up with this or that person or they can make them a star and so on. Because the young actresses are desperate, they easily fall into that trap,” says Christabel.
But the actress, who has worked with some of the best producers and directors in the industry, said it did not pay  in the long run to start this way.
“You  can use your body to get a producer to give you a role in a movie but it takes more than just one movie to become a star in an industry like ours because we don’t shoot movies that have such big budgets that they can be shown across the world. Even though we do good movies, one movie cannot put you out there in the market for you to become a star overnight.
“Producers are looking for really talented people to work with so if you’re talented, I don’t see any reason why you won’t make it. If you’re good enough, they’ll definitely hire your service.
“In everythying, I still believe the actress has the final say. If you believe you have the talent and you’re ready to work and take your time, you’ll always get people ready to help you.”
Christabel, who has featured in movies such as College Girls, Deadly Passions, Wrong Target and Love or Something Like That, said such offers  readily came her way when she was starting out in the industry but  she turned them down.
“Of course, I experienced it because I was trying my luck and leaving no stone unturned in order to get someone to feature me in a movie but everywhere I went, there’d be someone who’d say to me, ‘be my girlfriend or do this or that.’
Some of these people were just in charge of auditions and wouldn’t even let me meet the producer or the person who’s really in charge.
“Fortunately I wasn’t desperate, but rather keen on working hard and using my talent to entertain people even though I could see people getting ahead of me. But now, time has vindicated my choices,” she said.
“But that is not to say there are no genuine people in the industry. I’ve also met lots of genuine and highly professional people in the industry who have helped my career in many ways,” she said.
As to why she had not been in the limelight for some time now, Christabel said she had been busy working on a couple of new movies, and also working on new advertising campaigns for some products.
Born to a Ghanaian mother and Nigerian father, Christabel had a taste of the beauty pageant world when she was first runner-up of Miss Malaika 2008.
She is also a  product of the St. Mary’s Secondary School where she was the Entertainment Prefect and the University of Ghana.
She cautioned young actresses in the industry, the demands of lecherous producers and directors. “Before you even think of coming into the industry, you have to ask yourself,
‘Do I really have what it takes? Do I really believe in my talent? Are you ready to work hard and be disciplined for it? Because that will not only take you to the top but keep you there as well.
“There are no shortcuts to success. You have to be dedicated and you have to work hard,” she said.