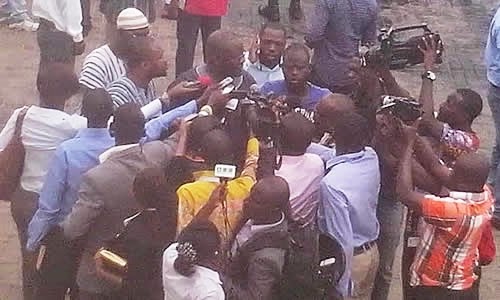 A press briefing by the national executives of Ghana’s main opposition, the New Patriotic Party (NPP) turned bloody on Tuesday when some angry party youth stormed the headquarters with machetes.
Some persons are reported to have sustained various degrees of injuries while a vehicle belonging to the national women’s organizer, Otiko Djaba was vandalized.

Citi News’ Richard Dela Sky was present at the media briefing and reported that the angry youth stormed the premises with knives and pistols which “resulted in a free for all fight.”
The national chairman of the NPP, Paul Afoko together with some Police Officers are working to restore calm.

Sky described the situation as “a very disturbing development; a never-before seen development here at the NPP headquarters.”
Narrating some of the scenes from the NPP headquarters, Sky said: “I have so far seen about four different youth with blood stains all over their bodies. At one point, I saw one of the guys with a machete using it to stab someone who was in Otiko Djaba’s vehicle. That boy subsequently came out with blood stains over his shirt.”

Some party executives and media men who attended the press briefing were held up on the first floor of the building during the violence.
“We cannot move out because of the violence currently ongoing. Some people are trying to talk to them to calm down,” Sky reported.
The national chairman, Paul Afoko and the general secretary of the NPP, Kwabena Agyapong are under severe pressure from some aggrieved party members who say the two are hurting the party by taking unilateral decisions in an attempt to restructure the party.
The party’s acting communications director; Perry Okudzeto was on Friday asked to proceed on a two-year accumulated leave.

The decision caused an outrage in some quarters of the party who were aggrieved by the refusal of Mr. Agyapong to consult the party hierarchy before relieving Mr. Okudzeto of his position.
The angry NPP youth say they are unhappy with the current leadership of the party and are therefore demanding their removal.
The press briefing on Tuesday by Afoko and Agyapong was to explain the rationale behind the decision and also to make further clarifications on other party matters.