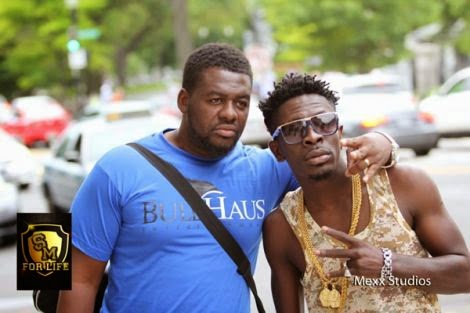 Manager of controversial artiste, Shatta Wale, has expressed confidence in their lawyers, who are yet to respond to a defamatory suit filed by Charterhouse, ‘to do justice’ to the case.

The statement of claim deposed by Charterhouse alleges that Shatta Wale uploaded defamatory statements on his Facebook page on the 23rd and 24th of September, 2014.

The Plaintiffs are also praying the High Court to order Shatta Wale to retract those statements and apologize through a number of media channels.

The ultimate demand by the Plaintiffs to the court is the “slapping” of a whopping Ten million Ghana cedis GH10,000,000 to shatta wale as damages caused after the publication of those articles.
Speaking to Citi News, the manager of Shatta Wale, Lawerence Nana Asiamah Hanson also known as Bulldog said Shatta Wale was calm and presently recording songs in the studio and that fans should not worry.

“We have received the writ so obviously it’s with out lawyers, that’s what I can tell you. I’m sure our lawyers will do justice to whatever it is… my lawyers will advise as as to the next line of action,” he said.

According to him, the camp of Shatta Wale is calm and going about their “business as usual. He is in the studio as we speak.”
When asked if Shatta Wale was disappointed in his actions, he re
sponded by saying that “why would you be disappointed or hurt if you spoke your mind or the truth?”.

After news broke that Shatta Wale had been sued, musician Samini took a dig at him on Twitter, asking his fans to help him convert GHS 10 million into dollars. He tweeted:
#Helooooooo ….Eii guys. Pls help me convert 10m gh into USD $$wai. What’s the current rate kraa ? #iskoki just #violate and get clamp

Did I see a post by a retired musician laughing at an active musician who is fighting for the rights of all musicians.

Wow!!! When we are fighting for a just cause some dumb people are laughing because they are “high” on some substance. ‪#‎funnymangosuckpito‬