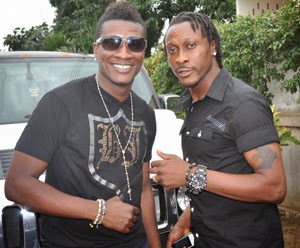 Baffour Gyan, the elder brother of Black Stars captain Asamoah Gyan has been arrested after he turned himself in following allegations that he led an assault on a correspondent of the Daily Graphic newspaper, Mr. Daniel Kenu.

Public Relations Officer of the Ashanti Regional Command ASP Tanko said the former Black Stars player has written a caution statement and will assist with investigations.
“He has reported himself. I think he heard that we were looking for him, and he has come. We are grateful to him for his coming.”

Baffour Gyan was said to have first assaulted the reporter followed by the macho guys who were with him. Mr. Kenu had gone to the Baba Yara stadium to pick his accreditation for the Ghana -Uganda clash on Saturday when the incident happened.

Daniel Kenu lodged a complaint at the Kumasi central police station.
He explained to JOY Sports correspondent George Addo Jnr, the men in the company of Baffour Gyan queried him on why he asked a question in connection with the mysterious disappearance of hiplife artiste Theophilus Tagoe, popularly called Castro, after he went swimming at the Ada beach resort some weeks ago.

Daniel Kenu wanted confirmation on, or otherwise, of allegations that Asamoah Gyan had “sacrificed” his friend Castro when they went for holidays in Ada.
At that press briefing organised by the Ghana Football Association on Wednesday at the Miklin hotel, the Black Stars captain nearly confronted the reporter. His brother is said to have picked up from Asamoah Gyan’s fury and beat up the reporter last Friday.

Following his arrest, the Police are preparing Baffour Gyan for bail.
In a related development…
The Ashanti Regional branch of the Ghana Journalists’ Association (GJA) condemns in no uncertain terms the assault on Mr. Daniel Kenu, the Ashanti Regional correspondent of the daily graphic newspaper by some macho men led by Baffour Gyan, the elder brother of Asamoah Gyan, captain of the black stars.

Baffour Gyan was said to have first assaulted the reporter followed by the macho guys who were with him
Mr. Kenu had gone to the Baba Yara stadium to pick his accreditation for the Ghana -Uganda clash on Saturday when the incident happened.

It all started when the reporter gave a platform for the skipper to clear the air of the rumors that he had sacrificed hip life musician, Theophilus Tagoe, popularly called Castro.
That was at a press briefing organised by the Ghana football Association on Wednesday at the Miklin hotel where stars captain nearly confronted the reporter

The GJA finds it strange and shocking that such a nice opportunity given to the player should be abused It should be put on record that whether Asamoah Gyan likes it or not the rumour is out there and the reporter without any malice wished that he used the occasion to clear himself.

In any case, why did Bafour Gyan not lead thugs to attack Lawyer Justice Ampah when he called for the arrest of Asamoah Gyan for questioning in the wake of the Castro tragedy?
The GJA would like to remind the family of Gyan to stop thinking that their so called popularity in football could clothe them with authority to treat journalists with contempt.

Some quarters are saying it was not an appropriate forum for the opportunity offered to the player, but as journalists what determines a right forum?
We hope that the Regional Police Commander, COP Kofi Boakye would not renege on his promise to deal with the recalcitrants and prosecute them to deter others.

This is not to say that journalists are superior beings but why should a journalists be assaulted for asking a question
Journalists cover stories with interest of all sections of the society in mind and so whether negative or positive stories emanating we cover without fear or favor .