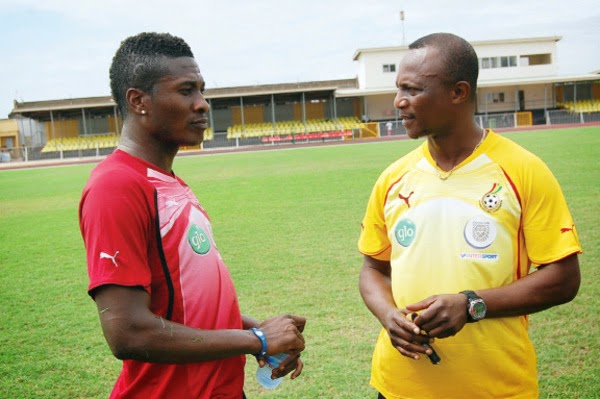 Ghana coach Kwesi Appiah has revealed that he suffered constant verbal abuse from Kevin-Prince Boateng in the full glare of the other Black Stars players before a final mouthy tirade resulted in the manager decision to sack the Schalke midfielder from the World Cup camp.
The former Ghana captain insists that he is unlikely to work with the Schalke player in future if his attitude and discipline does not improve as this attitude could negatively affect the younger players in the squad.
Appiah says the Germany-born player cannot deny his verbal attacks on him as they all unfolded on several occasions during the
Black Stars training camp in Maceio.
In his first account of how their relationship turned sour, Appiah revealed that since dropping Boateng to the bench in their Black Stars opening match at the World Cup against the United States, he has not known peace from the Germany-born player.
Ghana sacked the player from the World Cup on Thursday morning with the federation’s statement revealing that Boateng was sacked

for his unrepentant ‘vulgar insults’ directed at the coach.

Appiah disputed Boateng’s claims he used ‘f**k off’ against the Schalke player insisting that all the verbal abuse he suffered were seen by all the players in the camp as well as staff.
“I am surprised that he said that I used those words on him. Thing is as my player how would I just say an F word to him? Whatever he has done throughout our stay in camp all the players are aware,” Appiah said.
“Whatever he did everyone is aware. When you deal with players you ignore them sometimes because you need them to perform.
“But when it gets beyond the line you have to stamp your authority and let him know you are in control and that he cannot do things the way he wants, disrespect you and look down on you as if you are nothing.”
Appiah admits that working with Boateng in the future will be difficult if the player doesn’t mends his ways fearing that encouraging such players could damage team spirit.
“Sometimes it comes to whether the player shows remorse and let you know they are really sorry. In that aspect it’s fine,” said Appiah, who is the first indigenous coach to lead Ghana to the World Cup.
“But if the person has been doing it, doesn’t care and looks down upon you then it will be really difficult to say I will work with him again because once he comes back he could do something terribly worse.
“As I keep saying it is about teamwork. One person should not hold the whole nation to ransom or should not destroy the youngsters because once they also pick that attitude whoever is handling the team will find players who will give him the same problems.”
Boateng publicly questioned Appiah’s decision to start him from the bench in the match against the USA but flopped when he was started in the game against Germany which resulted in his substitution.
What do you make of these revelations? Do you believe Appiah or Baoteng? Should a player question a coach’s decision to start him from the bench? Make your views known in the box below