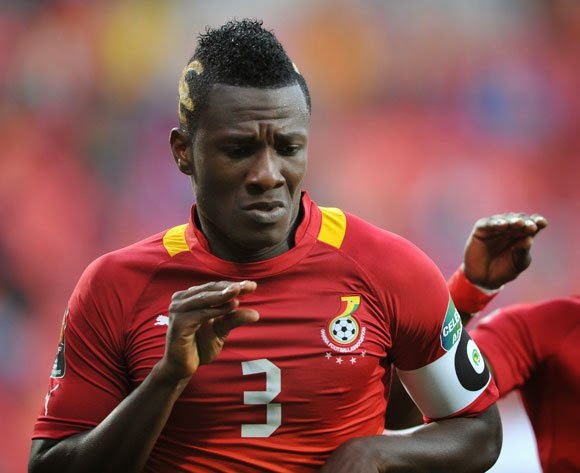 News coming from the Ashanti regional capital Kumasi indicates that a journalist has touched the sensitivity of Black Stars captain Asamoah Gyan during a press interaction yesterday Wednesday 3, 2014.

Ahead of the Ghana vs Uganda qualification game for the 2015 African Cup of Nations at the Baba Yara Sports Stadium in Kumasi on Saturday, a press soiree was organized by the Ghana Football Association to meet with the press to solicit its support in whipping up interest ahead of the game at the Miklin Hotel yesterday September 3 2014.

According nydjlive.com, questions were thrown at the players present and the technical team but the highlight of the night was when a journalist by name Mr. Ket who supposedly works with Graphic Communication angered the leadership of the team and the captain of the National team Asamoah Gyan as he asked a question that has been considered by many journalists present as a “silly” one.
The journalist who had all the opportunity to ask any question with regards to the upcoming game, things to do with the technical team and anything surrounding the National team rather chose to ask how true rumours and allegations were that Asamoah Gyan had “sacrificed” his friend Castro who has gone missing for the past few weeks as to better his lot as a footballer.

“This will not be in a good taste…It has nothing to do with the upcoming match but I wish to appeal to Asamoah Gyan to clear the air.. There is this allegation that you sacrificed Castro for whatever reason…………”

Although the question sounded funny at first, it also sounded “silly” as Asamoah Gyan and the entire leadership of the team will not take it lightly.

The President of the Football Association (FA), Mr. Kwesi Nyantakyi would however not allow Asamoah Gyan to answer the very sensitive question as a section of the media present even considered the question as bogus and not worth answering. But it appears Asamoah Gyan looked very annoyed as the look on his face showed, even though he was made to keep mute over the issue.

Many have considered the question harmless although others also believe the premise was not right for that question.

Ahead of the press soiree, two football fans had been arrested for taunting Asamoah Gyan over Castro at the training grounds.