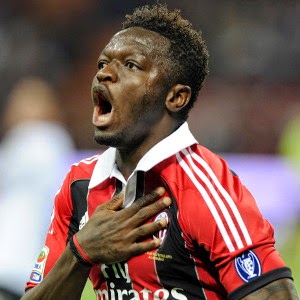 AC Milan midfielder Sulley Muntari has signed a one-year contract extension.
On Wednesday, Milan says Munatri extended his deal “until 30 June, 2016.”
Muntari’s previous contract was set to run out in 2015.
The 29-year-old Muntari made 34 appearances for Milan last season in Serie A and the Champions League, scoring six goals.
Muntari joined Milan initially on loan from city rivals Inter in January 2012, before making the move permanent in a free transfer that summer.
The Ghana international is at the World Cup in Brazil, where he played the entire 90 minutes of his country’s opening match, a 2-1 defeat to the United States.